007 Rides an Aston Martin DB9 GT in Next Bond Flick 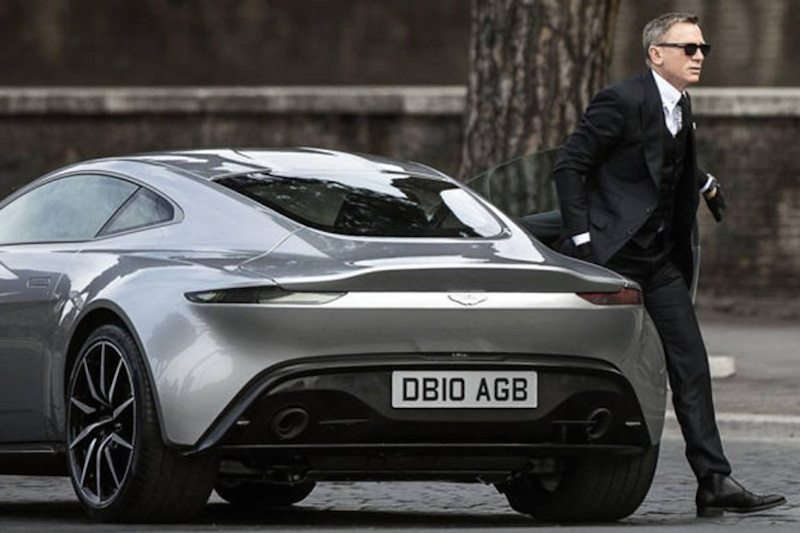 Over the course of five-plus decades of James Bond films, the dashing secret agent has relied on a variety of stylish vehicles with which to vanquish his foes. Chief among those vehicles have been those produced by the luxury British automaker Aston Martin. Bond actors ranging from Sean Connery to Pierce Brosnan have driven an Aston Martin, usually the iconic DB5 model. While Daniel Craig may be the latest actor to inhabit the Bond role—the seventh, in fact—the Aston Martin tradition remains the same. For Spectre, the 24th film in the Bond series, 007 will be riding in an Aston Martin DB9 GT. This Bond Edition DB9 GT will be limited to 150 units based on the DB9 GT model that was unveiled by Aston Martin back in late June. True, the Aston Martin DB9 GT available for sale won’t have cool gadgets like ejector seats and twin-machine guns (at least, not yet). However, the DB9 GT features a potent 6.0-liter, V12 engine that generates 540 horsepower and 457 pound-feet of torque. In addition, the DB9 GT can go 0 to 60 in 4.4 seconds and reach speeds of up to 183 mph, making it the sort of the high-performance luxury car that can deliver the world-class grand touring capabilities that Aston Martin fans have come to expect. The Bond Edition Aston Martin DB9 GT featured in Spectre will come with unique stylistic touches such as specialized Spectre Silver paint and “007 Bond Edition” exterior badging. The vehicle’s interior sports unique numbered sill plaques with the instantly recognizable 007 logo and gun barrel embroidery on the 2+2’s rear seat divider. And for those who want to imagine they’re driving a vehicle worked on by Q, the Bond-inspired Aston Martin DB9 GT is equipped with an Ami II touch-sensitive infotainment system with a Bond Edition start-up screen. As with Bond’s antagonists and femme fatales, the cars he’s driven over the years have made an indelible mark on the franchise. Indeed, as Aston Martin CEO Dr. Andy Palmer noted, “Aston Martin and James Bond are intrinsically linked in the minds of many of our enthusiasts and, indeed, owners, worldwide.” He also added, “I’m sure the 150 owners worldwide who succeed in acquiring [an Aston Martin DB9 GT] will, like the rest of us, delight in seeing Spectre when it is released later this year." As much as performance, the Aston Martin’s hand-built craftsmanship has been a hallmark of the brand since the early 1950s and the vehicle’s prominent role in Bond films over the years have helped to make an indelible impression on moviegoers. The Aston Martin was first referenced as Bond’s ride of choice back in Ian Fleming’s 1959 novel Goldfinger. When the book was adapted to film in 1964, Sean Connery’s Bond drove a DB5 on screen for the first time, thereby cementing the bond between iconic driver and iconic vehicle. Here’s a quick look at some of the more notable Aston Martin action sequences in Bond films over the years: When the Bond franchise was rebooted with Daniel Craig as the lead in 2012’s Skyfall, the producers decided to have Craig drive a DB5 for the film’s explosive climax. Here’s Daniel Craig as Bond and Judi Dench as M riding in an Aston Martin DB5: Filmmakers had to continually innovate the vehicle’s technology in order to stay ahead of the times, so it’ll be interesting to see what new tricks the filmmakers of the latest Bond movie will come up with. Along with the Aston Martin DB9 GT, Spectre will also feature ten Aston Martin DB10 commissioned specifically for the film. According to sources, the DB10 is fully drivable and will be used in the film’s action sequences, as opposed to CGI. Here’s some spy footage of the DB10 in action: The Aston Martin DB9 GT will be on display at the Salon Privé 2015 motor show in the UK starting September 3. The Aston Martin DB11 is expected to follow the Bond Edition DB9 GT and should arrive on dealership floors sometime next year. Primary Image Credit: Bold Ride