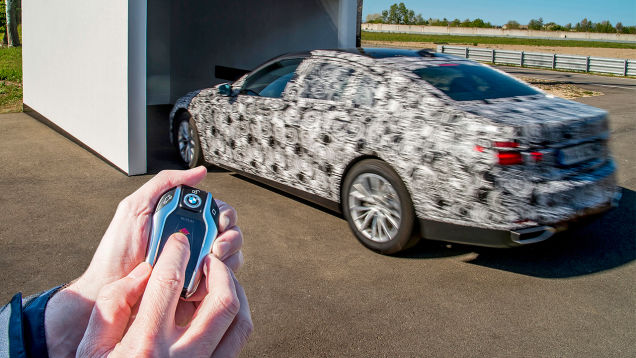 The new BMW 7 Series won’t be in dealerships until late 2015 at the earliest, which means the automaker has plenty of time to whet the public’s appetite with teaser videos like the one at the end of this post....

Before we show you some of the cool luxury features for the next-generation 7 Series, allow us to briefly summarize BMW’s recent announcements.

Most notably, the 2016 BMW 7 Series is the first production vehicle to offer a remote control parking function. Using a BMW display key, drivers can operate the car remotely to maneuver in and out of tight spaces.

The display key also functions as an all-in-one remote control and LCD control screen that allows 7 Series owners to access its various functions and important information about the vehicle itself.

Another key feature being offered for the first time is BMW gesture control. An onboard 3D sensor control recognizes gestures made by the driver that control vehicle functions, including controlling audio volume and receiving incoming calls.

Last, but not least, the next-gen 7 Series will be constructed of lightweight carbon fiber material that will lighten this lineup by up to 130 kilograms (or about 286 pounds). Carbon core technology has been successfully utilized by BMW in its BMW i Series and should provide the new 7 Series lineup with BMW’s typical sleek yet sturdy construction.

Now that we’ve provided the basics about the 7 Series, feel free to view the video below for more details:

And as always, rely on Auto Publishers for the most up-to-date information about new and used BMW 7 Series vehicles in your area! Our website has all the data you could want about dealerships in your area so that you can make the best decision possible about your next vehicle purchase.