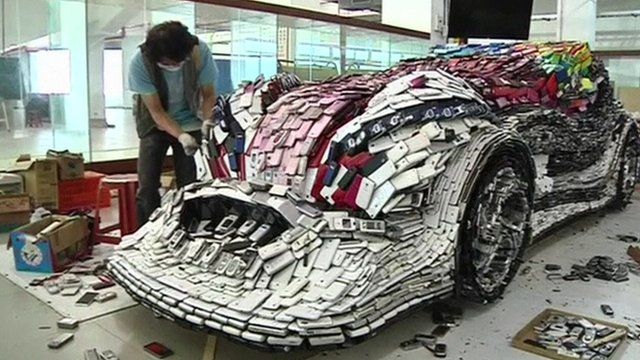 Cell phone technology is so ubiquitous nowadays that iPhones and Android devices are as disposable as Kleenex. Because cell phones have a relatively short shelf life, they tend to get discarded (rather than recycled) more often than most devices, which can have negative effects on the environment. One artist, however, is using our unwanted cell phones to create a green race car (pictured) that makes a statement about recycling our cell phones in an eco-friendly manner. The Taipei Times recently featured the latest project from Taiwanese artist Lin Shih-pao, who spent the last four years traveling around the world to collect discarded cell phones and another four months assembling the F1 Green Race Car. Lin called it a green race car not because of the vehicle’s color but because of its status as an environmentally friendly concept car. Besides building a cool-looking art installation, Lin wants to make audiences aware of how “high-class garbage” (to use his phrase) can be reused responsibly. Lin assembled the F1 Green Race Car using a wooden frame as the form to which he nailed recycled cell phones arranged according to color. After a tour of the U.S., the two-ton green race car was then installed at a high school in Taiwan, which is where it currently resides. It cost Lin $30,000 to collect the 25,000 phones used to make his green race car model. To him, the price tag was well worth it as it “represents hopes for human technology to transition to cleaner energy sources.” Watch the video below for a glimpse at Lin’s artistic process for creating the F1 Green Race Car: