Audi Takes its First Step Into the Coupe Crossover Segment 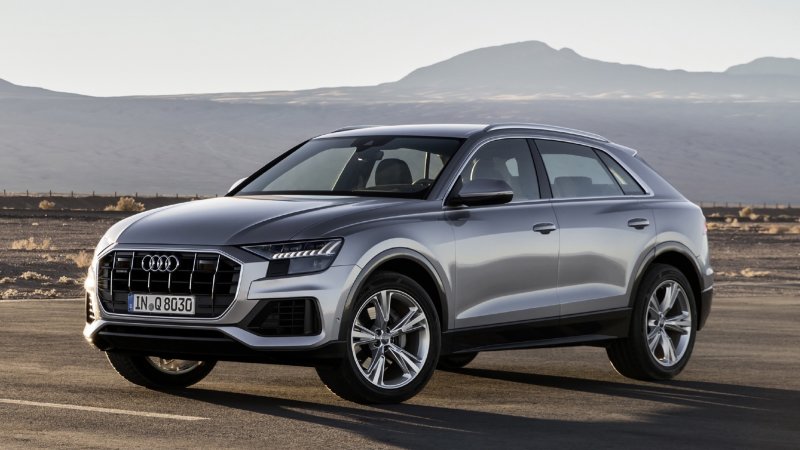 Audi is dipping its toes into the coupe crossover pool with its launch of the 2019 Q8. In competition with the BMW X6 and the Range Rover Velar, the Q8 is a fresh design for Audi, one that is sure to appeal to all types of car buyers. The coupe’s exterior features a sloped hood and a sleek body while the thick black band that connects the vehicle’s slatted taillights embodies the spirit of the legendary ‘80s Audi Quattro coupe.

The 2019 Audi Q8 has a 3.0-liter single-turbo V-6 engine that generates 335 horsepower and 369 pound-feet of torque to all four of the crossover’s wheels via the amazing Quattro AWD system. It also comes with a ZF-sourced eight-speed automatic transmission. Audi is including a 48-volt mild hybrid system with the Q8 to give the coupe a start/stop gas-saving feature. The crossover has a top speed of around 150 miles per hour, and it can reach 60 miles per hour in just about 6 seconds.

An adaptive air suspension system is also available with the Q8. This feature is connected to the four-wheel steering system to turn the rear wheels up to five degrees. The system features a 3.5-inch adjustment range that has the capability of raising the Q8 by as much as 10 inches above the ground, giving it more ground clearance than Toyota did with the 4Runner. The Q8’s suspension is one of the vehicle’s best features. Along with its ability to modify the height of the coupe, it also handles broken and uneven road surfaces excellently.

Inside the Q8, Audi added goodies like a two-tiered touchscreen infotainment and information setup. A 10.1-inch screen at the top of the system manages the basic infotainment tasks like media, vehicle settings and navigation, while the lower screen handles the lane departure system, defrosters and the start/stop feature. The cabin comes with comfortable ambient lighting in addition to aluminum trim and glossy black plastic elements. Buyers can get adaptive cruise control with the Q8 and steering assistance, which is available at lower speeds. With five cameras, a laser scanner and 12 ultrasound sensors, Audi’s new coupe crossover has the gear to keep its occupants as safe as possible.

According to vehicle testers, driving the Q8 is a pleasant experience. Not only does the coupe crossover come with plenty of power, but it also handles corners like a lightweight car. Those who drive the Q8 will feel as though they’re behind the wheel of a nimble automobile that almost seems to respond intuitively.

Those who bring home an Audi will be driving a premium vehicle, one equipped with top technology, a powerful engine and the right amount of luxury. Coupe crossovers like the Audi Q8 are moving the auto industry into the future.