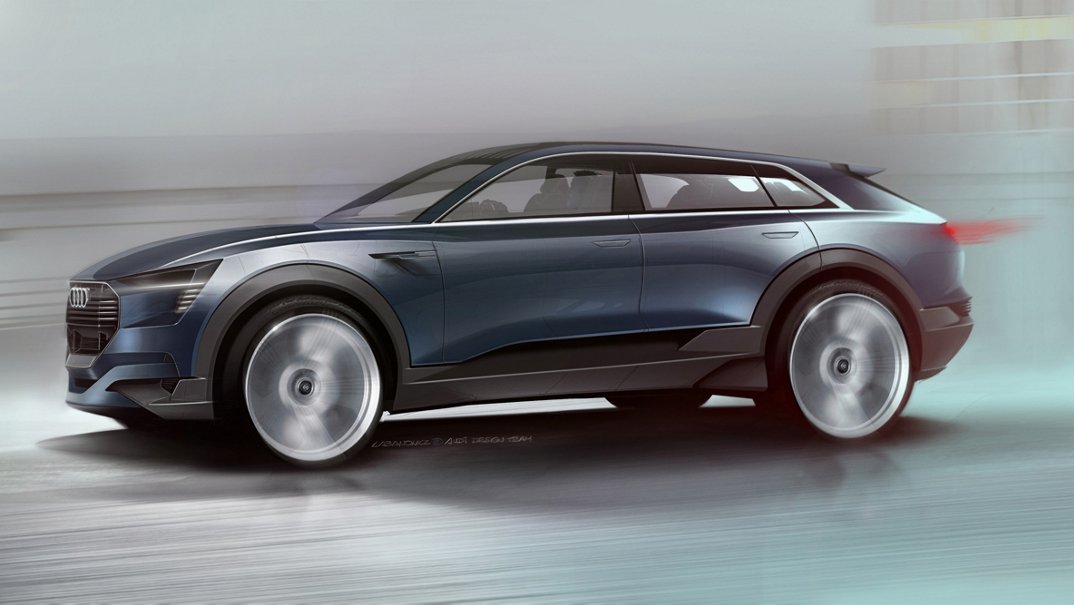 The impact of Tesla Motors on the automotive industry cannot be overstated. In its short existence, the little electric vehicle maker that could has changed the game by inspiring other auto companies to manufacture EVs of their own. One of Tesla’s more notable competitors in the electric vehicle field is Audi. As we noted in Part 1 of this series, Audi and Tesla are engaged in an electric battery war, with the most recent battle centering on Audi’s manufacturing agreement with electric battery makers LG Chem and Samsung SDI. In an escalation of said war, Audi released some teasers for the all-electric SUV that will likely be known as the Audi Q6. (You can see concept model sketches in the slideshow above.) Simply put, the primary mission of the Audi Q6 is this: challenge the Tesla Model X for dominance in the electric vehicle market. The Q6, which is officially being referred to as the Audi e-tron quattro concept, represents Audi’s inaugural entry into what it hopes will be a thriving line of electric cars. The e-tron quattro will come equipped with three electric motors, one of which is housed on the front axle and the other two on the rear axle. In addition, Audi’s first-ever large-series electric car will purportedly have a driving range of over 310 miles before a recharge is required, which narrowly yet decisively beats the 300-mile range that the Model X is said to offer. In addition to its lithium-ion electric battery, the Audi Q6 will include other features that recommend it as a vehicle of choice for the environmentally conscious. In particular, the Q6 sports an aerodynamic design that reduces drag thanks to a closed underbody and moveable elements on the front, sides and rear. These design elements contribute to a longer driving range and improved airflow around the vehicle. Last, but certainly not least, are the creature comforts. The Audi Q6 will utilize a second-generation modular longitudinal platform, which is a fancy way of saying that it splits the difference between the Audi Q5 and Q7 in terms of length. The vehicle’s roomy interior can seat up to four while its coupe-like cabin gives this electric SUV a fresh and dynamic look. Given Tesla’s issues with getting the Model X to market (for reasons already covered in Pt. 1), the Audi Q6 may already capture the imaginations of EV fans attracted to the newest and shiniest object. They will get their first look at the Audi Q6 e-tron quattro concept when it makes its high-profile debut at the International Motor Show in Frankfurt next month before going into production in 2018. As always, Auto Publishers will keep you updated on the latest developments between these burgeoning electric vehicle titans.