Avoiding Death in a Mazda6 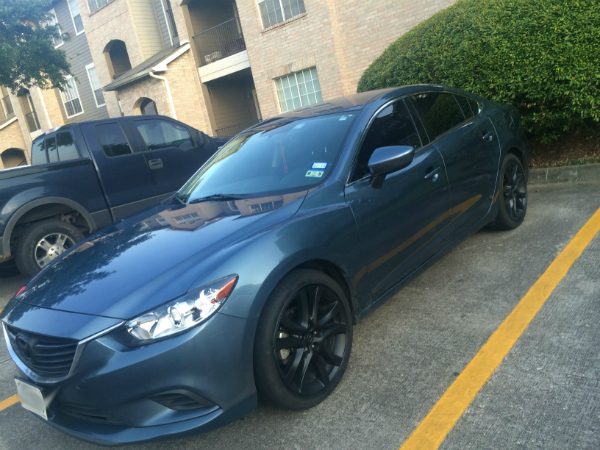 After teaching my friend to drive standard yesterday, I tested out his car. Jonathan drives a 2014 Mazda6. Currently it is ranked as the best family sedan in its market. In fact, I have actually been trying to get my hands on the 2016, because it is the first year that the 6 is available with a standard transmission. However, the trip I had in the 2014 Mazda6 had a more of a focus on avoiding death. A few days ago I was riding as a passenger in Jon’s car. It was a normal day, he was blasting his music out of his 2 twelves (two 12 inch speakers aftermarket speakers), and I was trying to avoid making eye-contact with other drivers. I, personally, dislike ear-piercing music blaring out of cars. I don’t mind a little kick of bass, in fact, with some songs, it is absolutely necessary, but it should never rattle my car or call attention from other drivers. It is nothing against anyone else, it doesn’t even really bother me, I just find it to be inconsiderate. No one should be forced to hear my music if they do not want to. That’s really neither here nor there, I just thought it should be mentioned. The point I was getting to is a genuine issue. I kept feeling the car wobble when he braked, especially during heavy braking. I mentioned it, and he said it had been happening for quite a while by then. My brother (who was in the passenger seat) speculated that it might be uneven brake rotors causing the teetering. I disagreed because the car was so new and the tremble was so unnervingly prominent. We parted ways without learning the root cause, but I told him to be deathly careful driving his Mazda6, and to avoid braking heavily. Yesterday, I met him at his friend’s house. His friend was plastic coating his rims, emblems, and lights in black. Before taking Jonathan out to teaching him to drive, I talked to his friend about the work he was doing. He explained that he was charging 150 for what proved to be a 6 hour paint job. Watching him I realized that patience was over 90 percent of the job (lots of waiting for coats to dry), the rest was (1%) taping and (9%) a steady hand. When I mentioned the wobble, his face froze. His face went all the way to dead serious before saying, “I saved his life. Jon’s lugnuts were so loose I could tighten them by hand… after lifting the car.” That by the way, was not an exaggeration. The tremble was so intense, I honestly believe that the next person that really cut him off would have been the last. After the work was done we drove both cars separately over to his apartment complex. It was not until then that I took the Mazda6 for a spin. The infotainment system was all stock, only the speakers were aftermarket. It was surprisingly intuitive, he has everything except the navigation system. It takes a second to get used to the difference between scrolling (turning the knob) and switching menus (either by moving the knob like a joystick or pressing the adjacent buttons (Phone, Audio, Navigation, and Setup)) after that getting around is common sense. The Mazda6 feels premium. The beautiful styling suggests a higher price, but you could drive the fully loaded Grand Touring off the lot for 30,000. Everything inside feels like it is covered in supple leather, especially the steering wheel. The backseat has lots of room, the seats are soft, and the seatbelt anchors have a natural spot carved out of the leather for them. I could not really gauge trunk space as there is a huge speaker box diminishing space. I didn’t really get a chance to get a feel for the car on the road, because the wobble persisted post plastic coat. I drove over a speed bump and heard what sounded like metal hitting metal (a loose wheel?), then as I was turning around a felt another wheel tremble, so I called it early. He went to the dealership this morning, and Mazda is going to replace his tires as they assume those are the root of the problem. He got the extended warranty, so the tires will be free, but the rotation is 50. Hopefully, next week, I won’t be as preoccupied avoiding death when I get in the new 2016 Mazda6; first year it is available with a manual transmission.