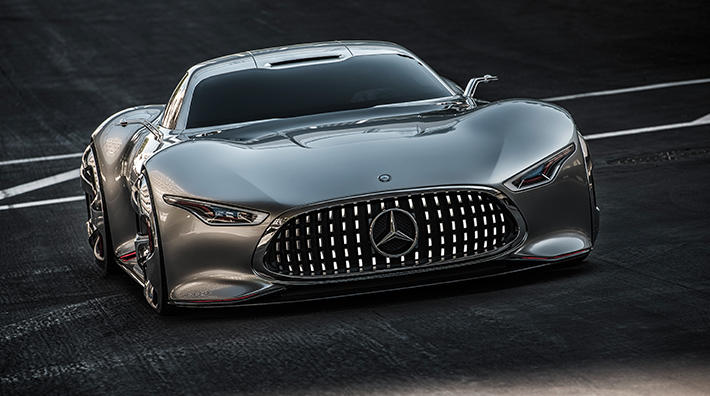 The upcoming major motion picture, Justice League, is going to have it all: high powered superheroes, awesome special effects, and some cool new rides from Mercedes Benz. Batman/Bruce Wayne’s civilian car is one that is gaining some serious attention from car lovers and movie fans alike. The Mercedes-Benz AMG Gran Turismo is a sleek super-sports car that was never really meant to be an actual, functioning car. The car was created as a concept for the Playstation 3 video game, Gran Turismo 6. However, the car’s futuristic design caught the attention of the film’s director, Zack Snyder. Once he saw it, he just knew that it would be the perfect car for Bruce Wayne. Mercedes-Benz then partnered with production and worked hard to take the car from concept to the vehicle that movies-goers will see on the big screen when they go see Justice League.

In order to bring the car from a video game concept to the big screen, the designers at Mercedes-Benz had a lot of work to do. First, they had to design an interior since the original concept model had no interior. They decided to put in racing seats and a virtual dashboard. They also put in a butterfly steering wheel as opposed to the standard circular one. The car’s scale from concept car to real life functioning vehicle also had to be increased by about 10% in order to fit the 6’4 frame of the Batman/Bruce Wayne actor, Ben Affleck.

The outer appearance of the car is definitely something to behold. The car has beautiful illuminated silver panels that have a chrome-like finish. It comes with gullwing doors, and has replaced the side view mirrors with cameras. The car also comes with a grill with LED lights on it. The lights can be programmed to make interesting designs. So if Bruce Wayne really wanted to, he could make the lights take the shape of his Bat symbol.

In the trailers for the film so far, the car can be seen in action as Bruce Wayne goes to Barry Allen’s (The Flash) hideout to recruit him for his team. Once Barry Allen and Bruce Wayne are situated in the car, the Gran Turismo then whisks off to the fictional Central City in complete style.

Along with bringing the AMG Vision Gran Turismo to reality for Batman, Mercedes also designed an E-Class Convertible for Wonder Woman and a G-Class 4x4 Squared for a yet undisclosed character. Mercedes has promised that the G-Class will play an important role in the film.

Action movies and cars go hand in hand. The cars can be used as props in cool stunts, or something that helps define the character. The car is what movie goers gush over once they leave the theater. In future big budget productions, we hope to see more instances of the auto industry and Hollywood collaborate on awesome automotive designs.