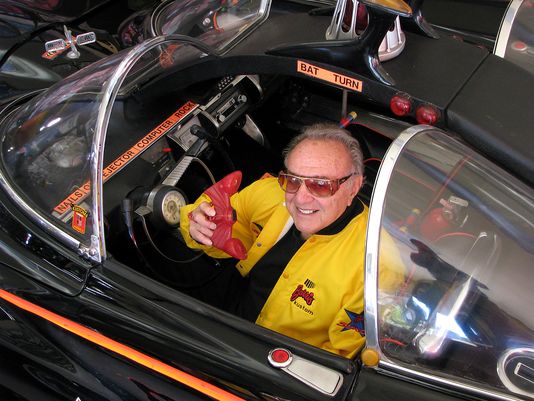 Legendary custom car designer George Barris died Thursday at the age of 89. Known as the “King of the Kustomizers,” Barris (pictured) designed many of Hollywood’s most iconic vehicles, including the Batmobile from the 1960s Batman TV series. The world learned of Barris’s passing through his son Brett’s Facebook post. Barris wrote that his father passed away in his sleep and that “[h]e lived his life [the] way he wanted til the end.” While Barris designed many famous custom cars over his long career, few were as famous as the Batmobile. The base model Barris used in his customized redesign was a 1955 Lincoln Futura concept car that Ford famously sold to him for $1. Since its debut, this 19-foot long, jet-black roadster with the double, clear-plastic canopy top and red racing stripes has made an inedible impression on the minds of TV audiences. According to Barris, this was (pardon the pun) by design. As he would later remark, “The car had to be a star in his own right.” And so it was. Looking back, it’s remarkable how forward-looking Barris’s Batmobile was: it had many amenities that will seem familiar to today’s drivers, including a built-in Batphone and a Bat-radarscope, a precursor to today’s GPS technology. The Barris-designed Batmobile was on display for a time at the Petersen Automotive Museum in Los Angeles before it sold at auction for $4.62 million, tying it for the then-record auction price set by the Aston Martin featured in Goldfinger. Born in Chicago in 1924, George Barris and his brother Sam to Roseville, California following the death of their parents. Barris developed a love of cars at an early age, making wooden models at age seven and later designing custom cars with his brother. While still in high school, Barris and his brother formed their own custom car club that they called, naturally enough, the Kustoms Car Club—a misspelling that, whether intentional or not, would come to be a Barris trademark. Shortly after World War II, the Barris brothers began their own “kustom” cars, and in the process helping to popularize the field of custom car design. Their work was so popular, in fact, that it soon attracted the attention of Hollywood. Their work first appeared on screen in the 1958 schlock classic High School Confidential. After his brother left the business in the 1950s, Barris went on to design custom cars for some of the biggest TV shows and films of the era. The list of famous custom cars Barris designed in his lifetime is impressive. Aside from the Batmobile, here’s a partial list of the custom cars that Barris worked on: • the Munster Koach from The Munsters • the Black Beauty from The Green Hornet • the Monkeemobile from The Monkees • the Ford Gran Torino from Starsky & Hutch • the General Lee from The Dukes of Hazzard • K.I.T.T. from Knight Rider Barris made a sizable impact on the American cultural landscape. He was prominently featured in Tom Wolfe’s The Kandy-Kolored Tangerine-Flake Streamline Baby, an essay collection published in 1965 that focused on the custom car culture of the era. His list of celebrity clients was an impressive who’s who of the entertainment world, including such luminaries as Elvis Presley, Frank Sinatra, Zsa Zsa Gabor, and Sonny and Cher. Today’s custom car designers owe a debt of gratitude to Barris, whose innovative and imaginative models helped make custom cars cools during the 1950s, 60s and 70s. “He was the man who started the American pastime for baby boomers,” said Edward Lozzi, Barris’s long time publicist and friend.