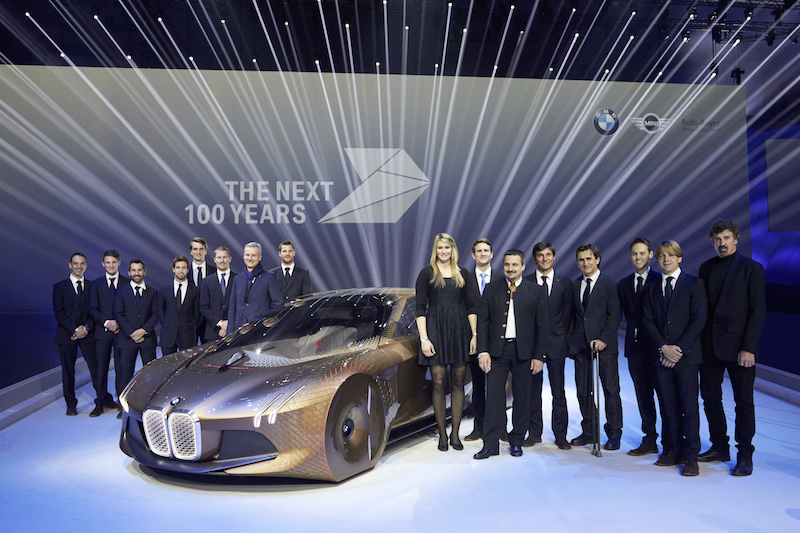 For a centenarian, BMW looks awfully good for its age. Today, the German automaker celebrated 100 years of fortitude by hosting a Centenary Event at the company’s home base of Munich. With one eye looking back at a century marked by successes and setbacks, BMW also looked ahead toward another 100 years by introducing the BMW Vision Next 100 (pictured), a trailblazing concept car that represents the future of mobility. It’s no accident that BMW chose its 100-year anniversary to showcase the BMW Vision Next 100, an autonomous coupé/sedan mash-up that can adapt to the needs of the driver. As BMW AG Chairman of the Board Harald Krüger remarked at today’s Centenary Event, “[BMW has] demonstrated on many occasions throughout our history that we are capable of learning fast and taking bold steps.” With that in mind, here is a brief, Christmas Carol-style review of BMW’s past, present and future in order to determine where the company has been, where it is now, and where it is heading in the future. The Past BMW began its existence in 1916 not as an auto company, but rather as a builder of aircraft engines for World War I-era propeller planes. (The company’s legacy as an aero-engine business can be seen to this day in its logo, a blue-and-white design that resembles a spinning airplane propeller.) After the war, BMW was forced to cease making such engines, which caused the company to transition to producing motorcycles and, eventually, automobiles. BMW introduced the Dixi, its first small car model, on the eve of the Great Depression in 1928. However, automobiles were far from BMW’s central focus, as it resumed manufacturing airplane engines during World War II. By the late 1950s, BMW was in dire straits financially and on the verge of being of being taken over by long-term rival Daimler AG, maker of the Mercedes Benz. During this period, there were two seminal events that brought the company back from the brink of economic ruin: the first was an injection of capital from the Quandt family, who owns nearly half of the company’s stock to this day, and the second was an emphasis on light automobiles that dovetailed nicely with an increased demand for family vehicles. The company was also one of the first to capitalize on the then-developing luxury vehicle market, which played a large role in bringing the company back into the black by the early 1960s. The Present From its humble origins, BMW stands today as not only one of the most successful premium-brand automakers in the world, but also among its most ambitious. As testament to its lofty goals, BMW set a goal of reducing its carbon emission footprint by 25 percent by 2020. BMW says it’ll reach this production goal by manufacturing 100,000 electric vehicles by decade’s end, thanks in large measure to plug-in EVs like the BMW i3. Under Krüger’s leadership, BMW is nimbly adapting to an automotive landscape that has evolved drastically in the past several years. BMW is among the automakers that will have to contend with the shifting economic climate in China, as prices there have normalized from their mid-2000s heights. BMW board members admit that there currently isn’t an emerging automotive market on the horizon that can compete with China—therefore, to compensate, BMW is shifting much of its manufacturing operations to Mexico. Overall, BMW says it’s still hewing close to Strategy Number One, a course-correcting plan enacted by the company in 2007 in order to ensure long-term profits. At the time, the strategy was heavily criticized as it resulted in deep cuts in payroll and employment. Over the long run, however, it led BMW to record profits and put the company on a strong footing going forward. The Future Like many automakers, BMW is developing autonomous driving solutions that will go to market over the next few years. The i5 is set up to be BMW’s next entry into the self-driving vehicle market, but by no means its last. Although BMW will face stiff competition in the autonomous vehicle field from tech giants Google and Apple, the BMW Vision Next 100 project clearly demonstrates a forward-facing perspective from the century-old automaker. “We see the future of mobility in an urban environment still with the car at the center,” BMW board member Ian Robertson told Automotive News. “But it is probably going to be autonomous to a greater or lesser extent, it is probably going to be shared, it is probably going to be zero-emissions, and it is definitely going to be accessed by connectivity.” Ultimately, BMW’s future as an automotive company will undoubtedly rely on embracing what some experts term a Fourth Industrial Revolution, which for the automobile industry would include autonomous driving and user-friendly vehicle technologies. “It's not like we're going to say, ‘Starting tomorrow, we are only going to build electric cars,’” a company source told Automotive News. “The question is how we can manage the transition from relying solely on combustion engines for profits, since not one carmaker currently earns money selling electric cars.” For more on BMW and the rest of the automotive world, keep on reading Auto Publishers!