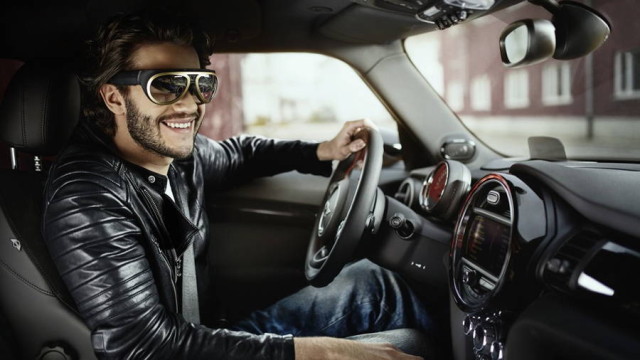 If you were told that a pair of glasses could help operate your vehicle, you might think that person was either crazy or a time traveller from the future. Or maybe you just haven’t heard about BMW’s augmented vision prototype.

Mini, a UK division of BMW, revealed its Augmented Vision concept, a pair of augmented reality driving glasses that allow drivers to see vehicle information typically found the dashboard, such as speed, gas and temperature, on a heads-up display.

The Mini Augmented Vision glasses, which were modeled after old-fashioned aviator goggles, come equipped with a GPS-like feature that enables hands-free navigation, as well as displays incoming calls and notifications to which the driver can respond via steering wheel controls.

The augmented reality glasses also allows drivers to check their blind spots by viewing vehicle side mirrors equipped with cameras. In essence, the driver would be given “x-ray vision” that can help them with difficult turns and making parallel parking easier.

The trick for BMW and Mini will be making sure that the glasses do not distract drivers as cell phones or GPS have been known to. In an interview with U.S.A. Today, Pat McKenna, manager of product planning of Mini USA, saidthat the Mini Augmented Vision glasses “would just keep our drivers focused on the road.”

BMW says it chose Mini as the test case for the augmented reality glasses concept due to the brand’s youth-leaning demographics and receptiveness to new technology.

"There's lots of talk now about autonomous cars, but people who buy our cars are young and tech-savvy and love to drive," said McKenna.

At this time, BMW hasn’t revealed when they will bring their augmented glasses prototype to market. While we wait to hear whether they convert their augmented vision into reality, here’s a sneak peek of the prototype’s X-Ray View:

And you can view new BMW and used BMW models in your area with Auto Publishers. We help make finding local vehicles in your area easier through our extensive inventory search feature. Select your next car by choosing the body style, make and model that you want today!