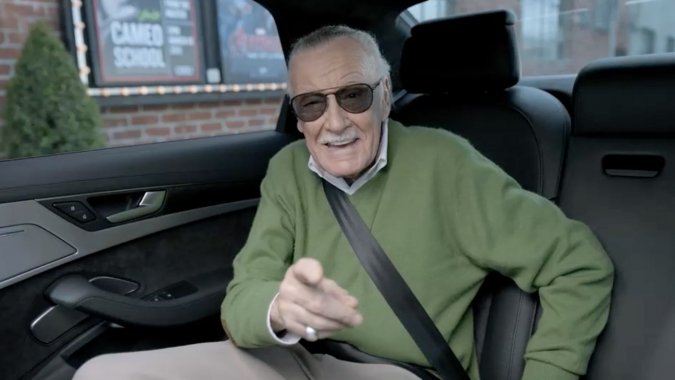 Aside from co-creating such iconic characters as Spider-Man, Iron Man and the Avengers, Stan Lee is perhaps best known for his brief yet memorable cameos in Marvel movies. In fact, he’s arguably the best cameo actor in the business, which is the premise of the hilarious new ad for the Audi S8.

The two-minute short is directed by Kevin Smith of Clerks and Chasing Amy fame—naturally, he appears in the ad alongside his Jay and Silent Bob collaborator Jason Mewes. The Audi ad also features Michael Rooker (Guardians of the Galaxy) and Tara Reid (American Pie) as students under Lee’s tutelage.

There’s even an appearance by the original Hulk himself, Lou Ferrigno, who (as we all know) you wouldn’t like when he’s angry…

In addition to promoting the Audi S8, the ad ties into Marvel’s eagerly anticipated Avengers: Age of Ulton. The Audi R8, Audi TTS and Audi A3 Cabriolet will be featured in the soon-to-be blockbuster film as Tony Stark’s auto brand of choice. If anything, it certainly confirms that he’s a man of wealth and taste.

But you don’t need to be Tony Stark rich to find a great new Audi or pre-owned Audi in your area—you just need Auto Publishers! We have listings for other great vehicles in your area, so come check us out!

See the Smith-directed Audi spot below: