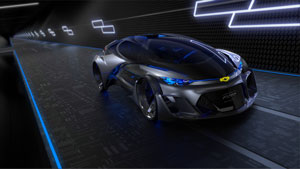 We all recognize the iconic DeLorean DMC-12 featured in the Back to the Future series. In retrospect, it wasn’t the slickest-looking vehicle, but who wouldn’t love to tool around in a sports car that can travel backwards and forwards in time?

While auto manufacturers haven’t yet invented a non-gas powered time machine, Chevrolet has come up with the next best thing with its FNR concept, which was recently unveiled at Auto Shanghai 2015.

The Chevrolet-FNR—short for Find New Roads, which has been Chevy’s slogan since that bygone era of 2013—is an autonomous electric vehicle with a bold, forward-looking design. Chevy says that the FNR concept provides a glimpse into 2030, the year in which the automaker predicts that self-driving vehicles will become commonplace.

In another 15 years, maybe all cars will come with DeLorean-like dragonfly dual swing doors with sharp edges, such as the ones seen here:

The Chevy-FNR sports crystal laser-powered headlights and taillights that give the vehicle a space age look even in the dark:

The FNR is equipped with roof-mounted radar and sensors that help guide the vehicle across various environments without the driver lifting a finger to punch in GPS coordinates:

If that’s not all, the vehicle’s front seats swivel 180 degrees so that you can talk to backseat passengers face-to-face:

According to the automaker, the Chevrolet-FNR will be “loaded with a range of intelligent technologies usually seen only in science fiction movies.” Those technologies are said to include magnetic hubless electric motors in each wheel and motorized webbed that can “read” passengers’ vital signs and adjust the vehicle’s temperature, lighting and music accordingly.

To see more photos of the Chevrolet-FNR, visit the GM News Viewing Gallery.

And to find out more about the newest automotive brands—now and in the future—be sure to visit us at Auto Publishers, your number-one information source for local new and used cars!