Could This Be the Beginning of a Beautiful Partnership Between Mazda and Toyota? 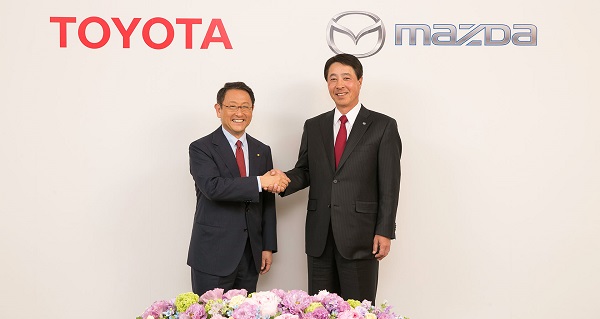 Mazda and Toyota announced the formation of a “mutually beneficial long-term partnership” designed to increase collaboration and spread costs between the two Japanese automakers. Among the outcomes of the partnership will be the formation of a joint committee that will determine “how best to utilize each company’s respective strengths.” According to Automotive News, the two companies are already engaging in collaborative projects in the wake of their announced partnership. One such project is said to be an exchange between Toyota’s hydrogen fuel cell and hybrid technologies for Mazda’s Skyactiv gasoline and diesel engine technologies. Yesterday’s announcement formalizes the preexisting relationship between the world’s preeminent auto manufacturer in Toyota and the comparatively smaller Mazda. Toyota is currently supplying hybrid tech for Mazda’s Mazda3 sedan, while Mazda is building a Skyactiv-equipped sedan for Toyota’s Scion line. Curiously, Toyota’s press release also struck a matrimonial tone. When asked about future projects between the two carmakers, Toyota Motor Corporation CEO Akio Toyoda was noncommittal. “This is an engagement announcement, not a marriage announcement,” Toyoda said. For his part, Mazda president and CEO Masamichi Kogai expressed his admiration for Toyota and his hopes for a fruitful relationship. “I hope that by working together to make cars better, we can raise the value of cars in the eyes of consumers while also enhancing the manufacturing capabilities of our home,” Kogai said. Contiguous with the announcement of the Toyota-Mazda partnership came news yesterday about massive recalls for the big three Japanese automakers. Toyota and Nissan were forced to recall 6.5 million vehicles worldwide due to defective airbags, while Honda recalled nearly 5 million units. The airbags were supplied by the Takata Corporation, a Japanese auto parts company whose products have been known to explode violently. Thus far, Takata airbags have been linked to at least six deaths and over 100 injuries. For more on the Takata recall story, please read Takata Corporation Troubles Continue on the Auto Publishers blog.