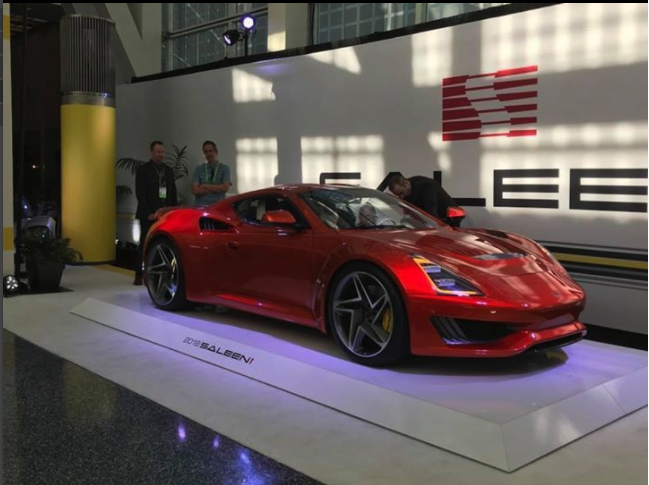 Saleen Automotive Inc . was founded in Corona, California in 1983. For the most part, Saleen produces specialty high-performance sports cars and auto parts. Some of Saleen’s past models include the Saleen 302 Mustang, 570 Challenger, 620 Camaro, and the GTX. The Saleen 1 is next in line to join the family of sports cars.  The Saleen 1 was recently revealed at the Los Angeles Auto Show. Not much has been revealed about their new model, but here is what we do know.

The size of the Saleen 1 is comparable to the Porsche 718 Cayman. The Saleen 1 has a body made out of aluminum and carbon fiber, weighing in at 2,685 pounds due to the materials used. This model is one of the lightest Saleen models to date. The previous model to hold the record was the 302 Mustang which weighed in at 3,705 lbs. The Saleen 1 is 16 inches longer than previous Saleen models, and comes with a longer tail and a stretched-out nose, a wheelbase that grows by 0.6 inches, and a 42/58 percent front/rear bias. The model unveiled at the Los Angeles Auto Show was a bright red color. Taking the Saleen 1 out for a drive is sure to get some looks.

Now let’s talk performance. The Saleen 1 comes with a 2.5 liter, turbocharged four-cylinder that was create in-house. The car has a horsepower of 450 and has 350 pound-feet of torque. The six-speed manual is standard and will come with a paddled shifted automatic. It is still unclear as to how many optional gears and clutches there will be. Saleen reports that the Saleen 1 will go from zero to 60 miles per hour in 3.5 seconds.

When the car goes into production, Saleen intends to keep production levels low. Saleen has typically been the type of car that people buy as a status symbol and the company wants to keep up with that image. The Saleen 1 will be produced in China. Founder Steve Saleen has paired with a Chinese investor to create the Jiangsu Saleen Automotive Technology Group (JSATG). The Chinese will supply the capital for the car and handle all production.

Originally, Saleen and JSATG were supposed to take the German Artega GT. During planning, it was found out that adapting the Artega to a four-cylinder proved to be very difficult. It also became difficult to try to adapt the Artega to meet modern Federal Motor Vehicle Safety Standards. Plans for adaption were scraped and new plans were hatched to create the Saleen 1 from scratch.

Currently, the Saleen 1 is expected to launch towards the end of summer 2018. If the Saleen 1 proves to be a hit, a Saleen 2 could be next. Saleen has been experiencing some well documented financial problems over the past year, and the Saleen 1 could be the model that reinvigorates the company. We look forward to seeing what Saleen plans on doing next.