Embrace the Dark with the Chevrolet Impala Midnight Edition 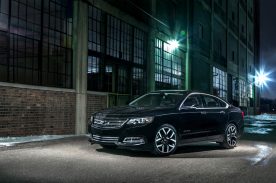 If you’re a fan of shows like Netflix’s Daredevil, you know that sometimes the heroes dress in black. Similarly, the Chevrolet Impala Midnight Edition will allow you to patrol the streets and look cool doing it.

Today, Chevrolet revealed its blacked-out trim package for the Chevrolet Impala, which is strongly based on the concept vehicle that debuted at the 2014 SEMA Show. The Impala Midnight Edition is set to see the light of day in early summer.

It would appear that the strikingly dark look of the Midnight Edition was designed to strike not fear, but rather awe, in the hearts of car buyers everywhere. Chevrolet director of car marketing Steve Majoros puts it another way.

“Since its introduction in 2014, Impala has become a benchmark for Chevrolet car design,” said Majoros. “The Midnight Edition further strengthens the Impala’s dramatic, head-turning styling.”

Among its notable features, the Midnight Edition will have Jet Black interiors and exteriors, 19-inch machine-faced aluminum wheels, and a black grille and surround. In addition, the special edition Impala will carry a 3.6L V-6 naturally aspirated engine, the most powerful of its type among sedans, and will be available in 3 trim levels: 1LT, 2LT and LTZ.

For more information, visit Chevrolet’s News page. And for more updates on the Midnight Edition, as well as everything automotive, turn to the Auto Publishers blog!