FCA Brought Up on Racketeering Charges by Chicago Dealer 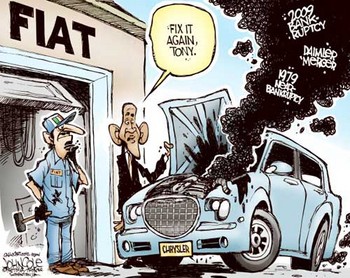 Could we have a Scandal at Fiat Chrysler on our hands? No, the Italian-American automaker hasn’t been accused of cheating on emissions like Volkswagen, but FCA may have a burgeoning PR crisis of its own (to join the ones referenced in the accompanying illustration). The Napleton Automotive Group, an auto dealership chain based in Illinois, filed a civil racketeering lawsuit against Fiat Chrysler Automobiles in a Chicago federal court, according to Automotive News. The suit accuses FCA of offering payola to Napleton in order to inflate its monthly sales reports. These bribes to dealerships may explain why FCA reported such outstanding sales figures last year—allegedly, at least. Here are the particular allegations provided by two Napleton dealerships: a Fiat Chrysler business manager offered Edward Napleton, the dealer principal, $20,000 to falsify the sales of 40 new vehicles at the end of a given month. Although Napleton rejected the bribe, he claims that the FCA rep previously propositioned one of his employees, without his knowledge, to falsely report the sale of 16 new FCA vehicles. Further, the Napleton suit accuses a competing area dealer of conspiring with Fiat Chrysler to produce 85 fabricated new vehicle delivery reports. Kevin Hyde, an assistant general counsel for the Napleton dealers, says that FCA encouraged dealerships to report the false sales on the final day of the month and then unwind those sales the following business day. As quid pro quo for those falsified reports, FCA allegedly paid off the dealership with tens of thousands of dollars. From a sales standpoint, 2015 was a banner year for Fiat Chrysler. The automaker posted 69 consecutive monthly year-over-year gains, which is impressive even in a year in which U.S. auto sales hit record highs. This U.S. sales streak is currently the longest recorded by any automaker. If, however, FCA’s sterling sales were, in fact, an illusion, it could very create a crisis of confidence in the stylish luxury auto brand. While Fiat Chrysler declined to comment on the specifics of the lawsuit, they strenuously denied the charges levied against them. “While the lawsuit has not yet been served on FCA US, the company believes that the claim is without merit,” the FCA statement read. “The company is confident in the integrity of its business processes and dealer arrangements and intends to defend this action vigorously.” If and when FCA elects to elaborate on its side of the story, we’ll be sure to report on it here at Auto Publishers.