Fiat Automobiles Revealed the 124 Spider, and it Is Better Than Expected 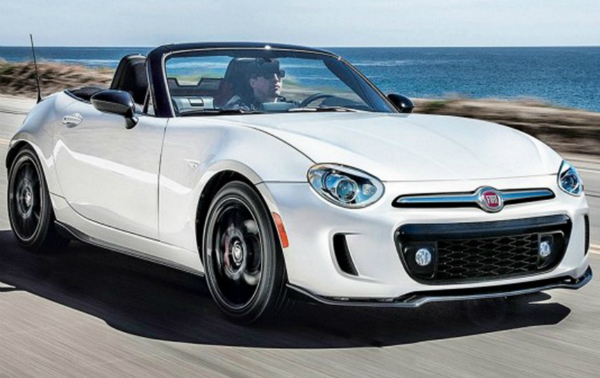 Today, before the LA Auto Show opens its doors to the public, something amazing happened; the highly anticipated Fiat Automobiles unveiled its modern take on the 124. There is a small chance, that no one else has been drooling uncontrollably since first hearing about its intended resurrection, but someone has. It is not an unreasonable response, this car was exciting. It is mostly Miata, with Italian styling, and what will surely be a reasonable price tag. Now it has been revealed that Fiat Automobiles will not use Mazda’s engine in the 2017 Fiat 124 Spider; instead, it will come with the ambrosial Abarth 500 engine. With that the information, the stream of saliva has surged in speed, so now it’s shooting out at a pace rivaled only by the dog from Beethoven. Now there will finally be a proper roadster at an entry level price. The Abarth engine, gives the 124 Spider: 160 horses and a phenomenal 184 foot pounds of torque… not to mention that voluptuous voice. The legendary 124 Sport Spider revealed by Fiat Automobiles in 1966 is perfectly embodied by its pro tempore counterpart. It was small, designed by the fabled Pininfarina design house by a relative rookie on a temporary assignment to the company, and powerful for its size and era. While at the time it personified a roadster; today, it (and its offspring) will fall under the classic Miata category of technical roadster, but ostensible cabriolet. The MX-5 is a fantastic car per se. Essentially unrivaled in modern mechanics, and a driveable dream. The only problem the MX-5 has ever had was branding (and aesthetics, which are lumped together intrinsically). MX-5 sounds like the name of a proper roadster, and it can be, but only on a track. As a daily driver, the Miata is more of a Cabriolet (they are synonyms (but not really)). The difference between the two is stylistic, the Cabriolet has a Luxury base (or a feminine feel) while a roadster is sporty at its core. A prototypical example of a contemporary Cabriolet is the Volkswagen Eos. Unfortunately it bombed, but the problem was financial. The Eos was too expensive, so it did not sell, because of lackluster sales it was not remodeled, due to never being remodeled the car became outdated. The only logical move now, is to cut their loses and throw all their eggs into the only other cabriolet the Beetle. Not that the Beetle is bad, it’s superb, only less luxurious. The Miata has looked and felt like a cabriolet for countless thousands of daily drivers who bought it, but for the select few that took it to a track they know it as the track-ready roadster it can be. It was not until this year that Mazda steered directly into the Roaster skid with their more aggressive styling. I understand the effort, but I disagree with Mazda’s roadster dogma, they have isolated their key demographic. Most of their sales have come from people (primarily female) who thought the car was cute (a word used to describe a cabriolet). The new Fiat 124 Spider will take up residence in the void left by the MX-5 when it went full roadster. Full roadster is a niche category, it is a special type of person that buys a straight roadster. That is why the S2000 was short lived. However, the Miata has soldiered on for years, because it was a nimble auto, but also aesthetically docile. Now it is too tough to play both games. That is where Fiat Automobiles positioned their new 124 Spider; the reveal showed, it looks amazing, but not aggressive, which is exactly what should be for ideal sales. However, despite the unassuming appearance, the Abarth engine gives it an imposing roadster air. If it composes itself anything like the MX-5 on the track, buyers are in for a special treat.