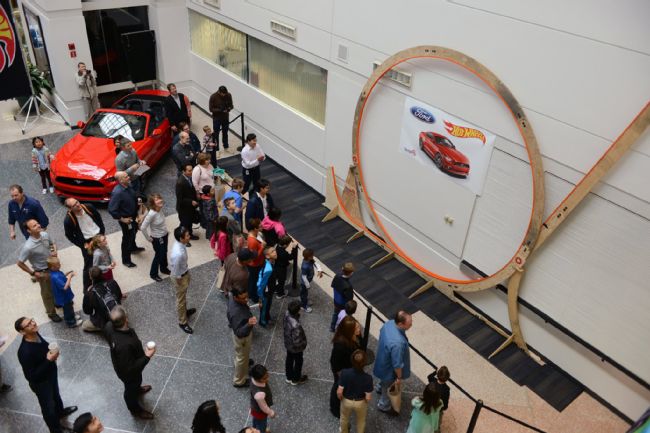 Bet you never had a Take Your Child to Work Day quite like this. Ford chose to commemorate this year’s event in a unique fashion—namely, by breaking a Hot Wheels world record.

Ford dynamometer technician Matt West, alongside his six-year-old son Blade and his fellow Ford employees, built a Hot Wheels track loop that measured 12 feet, 6 inches tall. The team used a Mustang Hot Wheels car to complete the circuit, which was done in the three-story atrium of Ford’s Research and Innovation Center in Dearborn, Michigan.

According to West, the impetus for the project was to work with Blade on a fun physics project at home, but ultimately it developed into so much more.

“In a world where kids are inundated with TVs and tablets, I thought teaching my son with actual moving vehicle models would be so much more rewarding, and then it took on a life of its own,” said West.

Ford says that the purpose of the Hot Wheels car track loop project was “to help children cultivate an interest in science and engineering.” With the help of Ford engineers and technical experts, the Wests developed their record-breaking loop using CATIA software that is also employed in designing Ford vehicles.

You can find out more about the science behind the Hot Wheels loop by heading over to the Ford Motor Company Media Center. Or, if you’re more of a results-oriented person, you can just watch the cool video below to see the loop in action: