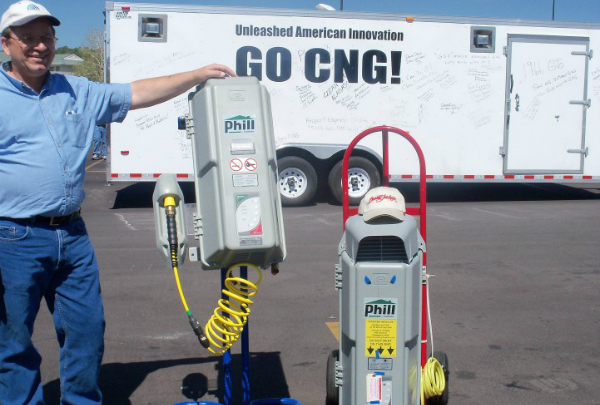 For years now, CNG (compressed natural gas) has been used to fuel millions cars. As of 2012 over 15 million were used globally. That number is not astronomical, but still impressive. There is one natural gas vehicle for every 450 people on the planet. That is impressive when considering the daunting competition: gasoline. Nonetheless, of the billion cars roaming the roads, 1 in every 66 is using one of the many future fuels, CNG. I personally did not know much about Compressed Natural Gas, other than it was more abundant than gasoline (we have over a 200 year supply in the US (not including what the US is pulling out at this exact moment)). I was worried that it would take years of toil to establish a refueling infrastructure for the future fuel. Before that happens, it would be tedious to drive 15-20 or more minutes out to the one station in your distant vicinity. Then, I thought, the sheer volume of total land acquisitions necessary to make CNG stations as prominent as their gas equivalents, would make the natural gas as expensive as gasoline for another few years. Again, that was all conjecture, the truth is much more promising. I was talking to Tom Laird COO of Rev Clean Power LLC, whom I know through friends. He was telling me that he had recently been to NGV (Natural Gas Vehicle) conference for research purposes. There he came across Jean Durdin. Tom told me that Jean was the person to talk to in Houston about NGVs. A member of the board on the GHNGVA (Greater Houston Natural Gas Vehicle Alliance), she also owns the Parkway dealership family, the one of current interest being Parkway Chevrolet. What makes Parkway Chevrolet so interesting is that they are leading the market in their field, they are the only dealership in Houston that is retrofitting gasoline models to use CNG, and it is one of the 5 biggest retrofitters in the country. To get more information on the subject, I went to go talk to Jean’s sister, whom; I was told; would be the most well versed on the subject. Heather Oglesby, is the director of Business Development for Parkway NGV Conversions. In a short interview, she gave me a crash course on the subject. Not just any car can be retrofitted for a CNG system. In order for any car to be able to run off natural gas the EPA must approve the design. The process is not brief, each engine needs either a unique fuel injection system designed for it or a custom conversion kit which has to be strenuously tested. This is the part that will drag the large scale implementation of the technology. Thankfully, in the future, refueling CNG will be the most convenient part of the whole ordeal. For 4800 you can buy PHILL BRC Fuelmaker a kit that reroutes some of your residential Natural Gas into the car in your garage. The process takes much longer than charging or refueling, about half a gallon an hour. However, the time is really irrelevant. The conversion from Gasoline to CNG does not compromise gas mileage, if you get 30 MPG of gasoline, it will be about the same for CNG. In a worst (-ish) case scenario, your car gets 15 miles to the gallon, and it takes you 2 hours to make your daily 25 mile commute. That is 50 miles driven, let’s round up to 4 gallons used daily. Your car would only need the 8 hours you sleep to refuel, every morning you would wake up to a full tank. Let’s say gas mileage is worse and the commute longer. You start charging as soon as you get home and don’t stop until you leave for work, and still don’t have 100% in the morning, you can make up the difference and then some on the weekend. The nominal price is steep, but at about 87 cents a gallon, CNG brings the actual cost down. Assuming gasoline will stay at 2.50 a gallon, it would only take 8 years to pay for PHILL in savings. And that is a very conservative estimate, as prices are not likely to stay low. Some may be rightfully worried about road trips and the like. If you are out on the open road often you can opt for a bi-fuel as opposed to a dedicated system. A dedicated system only uses green CNG, while bi-fuel is a Gasoline-CNG hybrid. So if you are out on the road you can fill with gasoline no problem. The problem with bi-fuel is weight, that’s two heavy tanks adding to friction. With dedicated you have to get lucky and find a CNG station out in the wilderness, however if you do, time will not be an issue, as at a station, your NGV refuel will be just as quick as a gasoline equivalent. Parkway Chevrolet/NGV Conversions is a one stop shop for all CNG needs. They have kits for home, small fleet, and even commercial stations. They also sell brand new NGVs, and their retrofitting has become so prototypical GM uses their work as an example. If you are interested in future fuel in Texas, apparently Parkway Chevrolet is the CNG gold Standard.