GM Allows Drivers to Make Purchases from Their Car 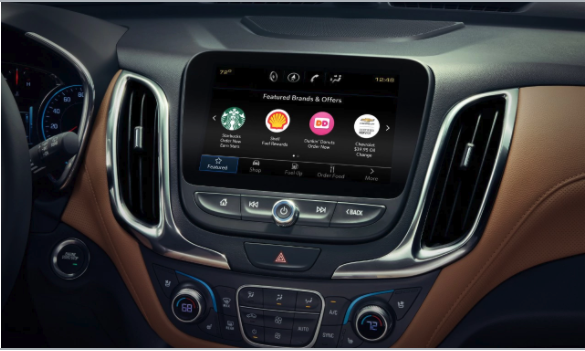 Imagine you’re driving and all of a sudden you start craving some buffalo wings, or maybe a cup of coffee. GM owners will now be able to make use of a handy new feature that allows them to make remote purchases, while they’re driving, through the Marketplace app. On GM infotainment screens, drivers will be able to use their cars to purchase all kinds of goods and services; they can reserve a table at their favorite restaurant, purchase data for in-vehicle Wi-Fi hotspots, receive discounts on oil changes, or get deals on brand new GM accessories.

The new Marketplace feature evolved from the work GM had done with IBM Corp. GM and IBM were working on a cognitive mobility platform, a technology designed to be a personal assistant. The technology will be able to predict the driver’s needs and turn each drive into a personalized experience. Marketplace is the first application in a series of personalization features that GM drivers can expect to see in the next few years.

However, Deborah Hersman, the president of the National Safety Council, indicated that the app could contribute even more to distracted driving. Currently, distracted driving is a factor in 25% of car accidents in the US. GM has responded to the claim by saying that using the app is actually safer than using a smartphone to place orders for food or coffee. GM’s vice president of Global Connected Consumer Experience, Santiago Chamorro, hopes that the new features will keep people from using their cellphones while driving and actually cut down on distracted driving. For example, if the driver wants to order a coffee, they will be shown only a few options at a time instead of the entire menu. Options will be presented to the driver in such a way that they will not have to scroll or search for the services they need. They simply need to glance and tap. Then eventually, once the app understands and knows the driver, the options presented will be the ones the driver usually orders.

So far, the new feature has been installed in close to 2 million vehicles. In the next 12 to 18 months, that figure is expected to double to 4 million cars. The service is independent from GM’s OnStar system and it will be downloaded into the vehicles using the 4G LTE connectivity that comes with the vehicles. The effort to get the feature downloaded is already in full spring. Marketplace is available to GM vehicle owners for free and does not require drivers to purchase a separate data plan.

The auto industry has seen a lot of interesting trends throughout the year, from phones in cars (and in some cases even fax machines) in the 90’s, to the current widespread use of 4G technology and wireless connectivity. The question is, will the Marketplace app catch on, or will it be forgotten the way fax machines in cars were forgotten?