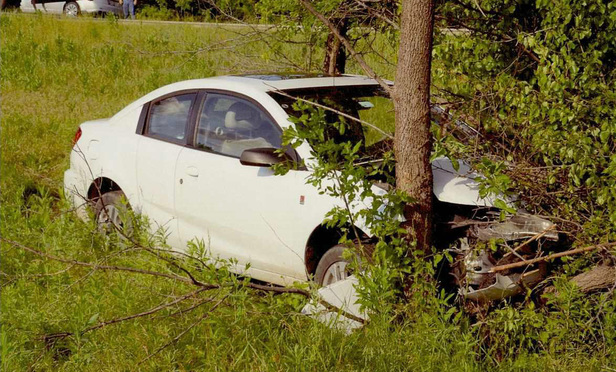 In May 2014, Robert Scheuer got into an auto accident while driving his 2003 Saturn Ion and crashed into a tree (pictured). According to Scheuer, the driver-side airbag in his Saturn Ion failed to deploy during his accident due to a defective GM ignition switch. As a result, he’s suffered from significant neck and back pain that has negatively impacted the quality of his daily life. Scheuer filed suit against General Motors, the manufacturer of his Saturn Ion, in New York federal court over the GM ignition switch issue. The trial, which began in early January, concluded on Friday with a decision that’s sure to displease Scheuer—and, by extension, consumers who had hoped to earn restitution for their own GM ignition switch cases. As reported by The Wall Street Journal, GM uncovered evidence that had Scheuer doctored a check stub shortly after his accident. Although the two events were unrelated, this new evidence damaged Scheuer’s credibility. With this evidence in hand, lawyers for both sides agreed to a deal to dismiss the lawsuit, and as U.S. Judge Jesse Furman succinctly put it in today’s court proceedings, “[the] case is officially dismissed and the trial is obviously over.” For its part, GM disputes that the ignition switch was to blame for Scheuer’s accident and subsequent injuries. Instead, it claims that the likely culprit for the airbag failure was due to issues unrelated to the GM ignition switch. These claims as they relate to Scheuer’s vehicle couldn’t be verified at trial because the ignition switch was destroyed in the accident. The dismissal of Scheuer’s suit is a significant win for GM, as this case was considered a “bellwether trial” for the GM ignition switch issue. At least five other bellwether cases are scheduled to occur throughout this year as GM hopes to establish a legal precedence for the consumer lawsuits brought against the company in the future. For this reason, many consumer advocates are concerned about the harmful effect the Scheuer decision will have on similar GM ignition switch complaints going forward. With all that said, GM’s legal troubles are far from over. Scheuer ‘s Saturn Ion was among the approximately 30 million GM models recalled worldwide due to faulty ignition switches, with 2.6 million of these models sold in the U.S. alone. These faulty GM ignition switches have also been linked to 124 deaths and 258 injuries. Most damning of all, GM was found guilty of withholding information regarding its GM ignition switch problems. Thus far, GM has agreed to pay over $2 billion in settlement fees with consumers, shareholders and the U.S. Justice Department. Auto Publishers will be sure to keep you updated on any further developments related to the GM ignition switch issue as they present themselves. Image Credit: New York Law Journal