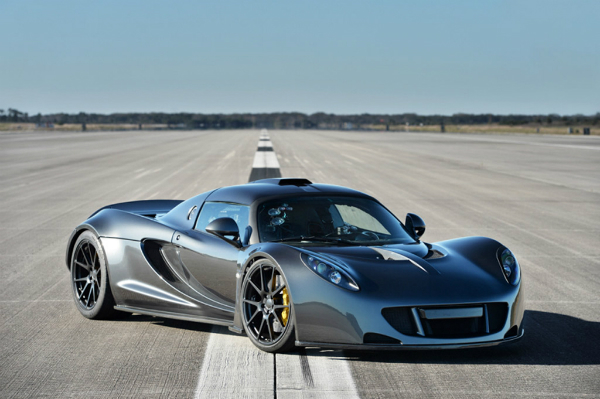 When Hennessey made the Venom GT, they had a singular goal in mind. They were going to create the fastest car ever made. On Valentine’s day 2014, they brought their car out to secret runway in a classified facility, where the like minded individuals brought their car up to a staggering 270.49 miles per hour before testing out their Brembo carbon ceramic brakes. Unofficially, the Hennessey Venom GT broke the production car speed record that day, however Guinness requires more loops to leap beyond being the fastest. To hold the title of fastest production car Guinness demands that more guidelines be followed. The car in question must have; at minimum; 30 models manufactured. The record keeper also requires the automaker to run the same straight forwards and backwards before using the average as the official record. Unfortunately, Hennessey will only ever assemble 29 Venom GTs, and the National Aeronautics and Space Administration (NASA) did not let the company make a run in the other direction. It is obvious that, Bugatti and/or Volkswagen paid Guinness (or even NASA) for the privilege of remaining the running record holder. Though, if the American motor company could be bothered, they could just build one more car and test it somewhere with a longer straight (the landing strip was relatively miniscule at a modest 3.2 miles), it would hold an uncontested record at a vaster velocity. Hennessey’s in-dash video of the feat shows that the car was still accelerating when it reached 270, it merely ran out of runway. Despite the asterisk adjacent to the title, denoting an unofficial status of fastest production car, the Hennessey Venom GT does hold the actual Guinness record for acceleration. The supercar made the run from 0-186 mph (300 kilometers per hour) in astounding (sounding) 13.63 seconds. Technically, however, that makes it the second highest accelerating car; in the same way that it is the fastest production car, because the Koenigsegg One:1 did it faster off the record. The self described Megacar managed to reach 186 mph in 11.922 seconds. That was the last generation model. Hennessey wants their flagship supercar to draw the curtain to applause. The Specialty Equipment and Market Association (SEMA) auto show in Las Vegas will surely allow the car that exact opportunity. This year’s incantation will be much faster than the last. Theoretical stats include: 2.4 seconds to 60, 12.8 to 200 (even faster than the Koenigsegg One:1), a 280+ top speed and a 9.4 second quarter mile. The Venom GT boasts a 1451 horsepower engine. Coincidentally (or possibly not), that is also the previous year’s 0-200 time. The amount of power pushed out the engine is in part due to the fact that the engine is able to run on E85 ethanol fuel, with preferred Pennzoil Platinum premium synthetic motor oil, keeping the high stress powerhouse potent. Thanks to the E85 and General Motors (GM); who made the motor; the seven liter twin turbo V8 can run on a higher pressure than most engines. The 2016 Hennessey Venom GT runs on 26 pounds per square inch (PSI) up from the 19 PSI it previously to propelled. Those who would like to foot the multimillion dollar bill to own one of these monstrous motored machines; will be hard pressed to do so, as the four person list of future owners have likely already made their intentions known to the producers of the portable power plant. Each one takes six months on the production line before ever seeing the street. While some might be disheartened unofficial fastest production car ever’s exodus; the ones who are not have likely heard of the Hennessey Venom GT’s replacement. The 290 plus promising F5, is due to present itself prior to reaching production lines for the 2017 model year (starting late 2016), at which point over 30 will be sold. Looks like this time wants the official crown.