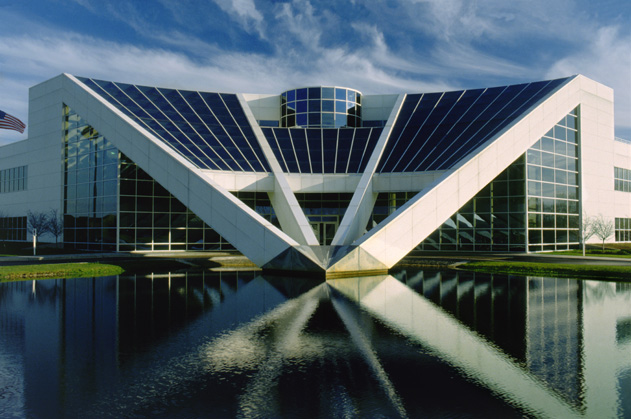 Many major automakers are preparing a beautiful array of vehicles to dazzle interested customers with new 2017 lineups. Recently, Nissan unveiled a gorgeous new concept vehicle to keep up with the greats at the Detroit Auto Show. They called their vehicle the Vmotion 2.0, and the car's primary concept depicts Nissan's vision for the brand's proPilot system, which is designed to make cars partially self-driving. In Japan, Nissan's Serena already uses the proPilot system, and it is expected that the technology is going to be used in Europe later in 2017.

The new concept car will highlight Nissan's vision to make self-driving technology more flexible and intuitive, all while improving the brand's vehicles and features. The concept car features a new and improved version of Nissan's deep-V grille, which has been extended to occupy the entirety of the car's front. The car is also planned with a floating roof design, which means that the flow is seamless from the car's trunk to its A Pillar. With aesthetic appeal in mind, the roof is also designed with silver thread accents. Keeping up with the sharper, natural lines drawn from the Nissan Maxima, the concept car is more geometry and features a larger wheelbase in order to expand upon the space within.

Like Nissan's design ambitions, the concept car will highlight Nissan's ambitions in the self-driving industry. Nissan's proPilot system is meant to allow vehicles to drive by themselves on the highway at max speeds of 62 mph. Compared to many other types of semi-autonomous systems, however, the proPilot is relatively limited, and studies show that it will not even have the capacity to change into lanes until later in 2018. Nissan's representatives have said that the brand is planning on taking a much more conservative approach towards self-driving vehicles in order to improve the driver's safety while pursuing autonomy. Nissan revealed SAM, which is an artificial intelligence system that was sourced from NASA. SAM will be ready to ask a dedicated command center for assistance if the car is stuck in a difficult situation. This will help drivers retain control in all types of driving conditions.

The vehicle is also equipped with a continuous horizontal display that is integrated into the dashboard to provide the driver with a more intuitive way to use the infotainment center within. The installed touchscreen display will also provide drivers with the vehicle's surroundings when the driver switches to proPilot. The display is also available for passengers in the back to make sure that everyone in the vehicle is informed. With such major changes on the way, many fans of the brand were excited to learn more about the concept car's features.