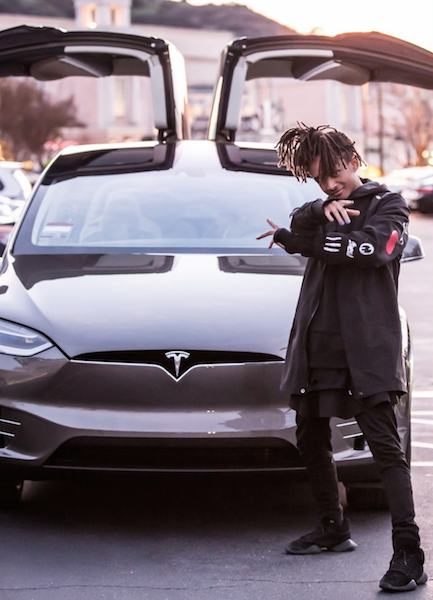 The Tesla Model X is scheduled to hit dealership floors in late 2016, but exceptions can always be made if you’re Hollywood royalty. At 17, Jaden Smith is the youngest owner thus far of a Tesla Model X. The After Earth star was pictured posing with his Tesla Titanium Model X this week in Calabasas, CA. To some, it may be a bit galling that a kid like Smith could get his hands on a Tesla Model X so quickly. But maybe that’s just our collective jealousy talking. After all, what person reading this wouldn’t take the Tesla Model X as their starter car if they (or more accurately, their rich Hollywood parents) could afford it? Smith is among the first to join an exclusive group of auto owners—only 15,000 Model X vehicles will be delivered in 2016, according to Tesla CEO Elon Musk. This figure represents 3,500 fewer Tesla Model X units than was initially expected. As per usual, Musk’s sales strategy is simple: keep ‘em wanting more. Older brother Trey tweeted his congratulations for his younger brother Jaden’s Model X purchase. "Watching my Lil bro get the keys to his first car #Priceless #1of1 #tesla #betonACE #jadensmith #congrats." It’s good to see Trey isn’t jealous of Jaden like we are. Maybe that’s because he knows he’ll get to drive Jaden’s Tesla Model X before we ever will. The general auto-buying public had to wait over three years before Musk finally delivered the Model X to the world. While its basic design remained the same, Musk and Co. managed to throw in a few surprise features. One of the Tesla Model X features that catches the attention of most people are the vehicle’s Falcon Wing doors. Clearly the gull-wing doors are reminiscent of the vehicular time machine Marty McFly drove in the Back to the Future trilogy. With the Tesla Model X, the rear passenger doors swing up in a wing-like fashion, which enables access to the vehicle’s second and third row seats. Jaden will also get to enjoy other Tesla Model X features like monopost seats, panoramic windshield and ludicrous speed (which I suppose makes Musk a Spaceballs fan!). You can read Auto Publishers for the latest Tesla news and updates!