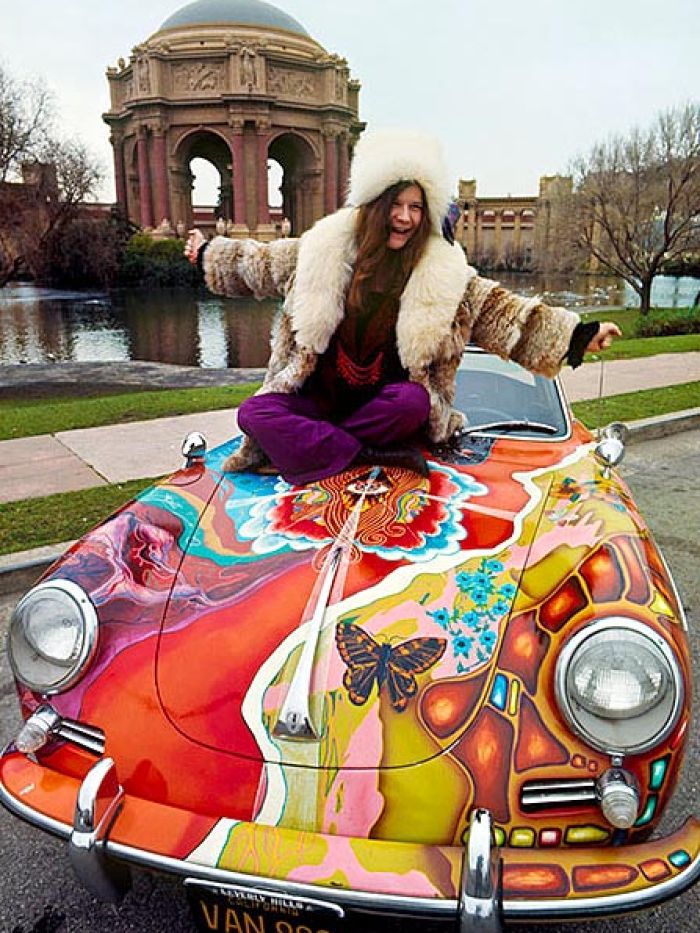 The late, great Janis Joplin famously sung of her love for Mercedes Benz, but that didn’t mean she discriminated against other luxury vehicles. In fact, Joplin owned a 1965 Porsche 356C 1600 Cabriolet (pictured) that was painted in psychedelic colors because, after all, it was the ‘60s. Now more than four decades since her passing, Joplin’s psychedelic Porsche will be auctioned off at RM Sotheby’s in New York City, where it’s expected to fetch over $400,000. Joplin’s Porsche is prominently featured in RM Sotheby’s Driven by Disruption event, which the collector car auctioneer describes as “a carefully curated selection of some 30 creatively-styled [sic] and pioneering motor cars” and related artwork. (The RM Sotheby’s lot list can be seen here.) An exclusive, six-day viewing of goods displayed in Sotheby’s 10th floor galleries precedes the psychedelic Porsche auction on December 10. Legend has it that after Joplin decided to give her Porsche a psychedelic paint job after concluding that the vehicle’s original Pearl White finish was simply too plain. To that end, she recruited friend and roadie Dave Richards to customize her vehicle. The paint job on Joplin’s Porsche was meant to represent “The History of the Universe,” which to Richards included images of butterflies, jellyfish and Joplin with her band. Eyewitness accounts from the era say that Joplin and her psychedelic Porsche were inseparable. “Janis drove the car everywhere,” recalls Laura Joplin, the singer’s younger sister. “Wherever Janis went in the car, her fans recognized it. When she parked it and returned, there was always at least one fan note under the wipers.” “Like most people and their car of choice, her Porsche is a direct link to Janis,” added younger brother Michael Joplin. “She drove it everywhere—and with everyone that was anyone in the San Francisco music scene—with the top down and her feathers flying. Her music, life and car are a part of rock and roll history.” While the psychedelic Porsche is primarily associated with positive vibes, it was also present during great tragedy. Joplin drove her Porsche to the Landmark Motor Hotel in Hollywood, where she died in October 1970. Following Joplin’s death, manager Albert Grossman took possession of his client’s Porsche. After Grossman’s death, the Porsche was restored and displayed at the Rock and Roll Hall of Fame, where it had resided since 1995. Now over two decades later, the Joplin family has elected to offer the vehicle for auction. If you happen to be in the market for a vintage Porsche owned by an iconic rock star—which seems unlikely, but who are we to presume?—then head on down to RM Sotheby’s in New York to catch today’s auction. Or if you’re driven by simple curiosity about how much Joplin’s Porsche will cost, visit the Driven by Distraction page on the RM Sotheby’s site.