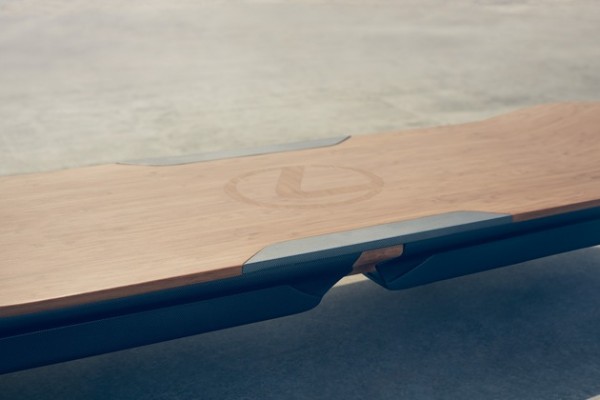 Most people know Lexus as a Toyota’s luxury branch. They make luxury cars comparable to those made by prominent names in Luxury like Mercedes, and outsell them. Granted Toyota makes cheaper cars than most of their competitors in any market, that is how they have been the number one seller for so long (though their throne was taken by Volkswagen this year). Now Lexus has taken an important step, they are trying to innovate ahead of their competition with their Hoverboard; code name: SLIDE. Ironically, their hoverboard does not actually slide. In their promotional video Ross McGouran does grind a rail momentarily. However, I am sure that was only accomplished because the rail was designed specifically for that. Unless a ramp led directly up to the rail (as it did in that skate park), that would never be possible, because the board is exceedingly heavy and incapable of a traditional Ollie. Truly, the board itself is Hyper impractical; not that it matters, it is still awesome (like a certain hypercar without cup holders). Because of that fact, Lexus refuses to make any for consumers. They say that the cost for each would be staggering. Beyond that, it would only work at a tailor-made park for 10 minutes a ride. Like the one they made in Spain for their promotional video, for an undisclosed amount of money. However, it is all but a boondoggle. The fact that Lexus made Hoverboard is not necessarily important (they were not even the first). A company that specializes in Magnetic Field Architecture named Arx Pax made one first. They used a Kickstarter campaign to bankroll Hendo (their Hoverboard). They used four “hover engines” to levitate their board. Each engine has a spinning motor creating an eddy current, which repels the custom magnetic floor that Hendo also requires. Eddy currents are constantly changing polarities, so at least half of the energy is lost (when opposite polarities are facing one another lift is not only lost, but reversed). While this is much cheaper and easier than what project: SLIDE did, it is much more wasteful. And if I am not mistaken, it also means that the Hendo board is not 100% friction-less. Knowledge of eddy currents has been around since the 1890s, it was too old to even win a Nobel Prize. Lexus used a superconductor, a technology that won the Nobel prize when it was discovered 20 years later by Heike Kamerlingh Onnes. Another 20 years went by before it was discovered that the superconductive state also repels magnetic fields. This budding old technology allowed SLIDE to float on 3-4 inches of a magnetic field while achieving zero fiction (other than air resistance). What makes the feat impressive, is that it was a fantastic proof of concept for superconductive technology, which could be pivotal for many industries. Arx Pax had envisioned using their eddy currents to save buildings in case of earthquakes and other disasters. Their website has quite a few suggested uses; superconductivity could make all of those processes more efficient. The problem thus far is the price, there is much more of an established infrastructure for eddy currents to take advantage of, making the technology momentarily more pragmatic. The hoverboard Lexus made, did the important task of highlighting how effective the technology is. If more people start taking advantage of the efficacy of superconductivity, the price will drop quickly. As of now the cost of producing liquid nitrogen is expensive, but most of that cost is upfront. Once the factory is built, our atmosphere is 78% nitrogen, all it takes is filtering out the other elements while cooling it down and storing it. If the infrastructure is put in place cars could float around using superconductors for lift and eddy currents as brakes, while recycling some of the energy used.