Lexus Is a Designer Brand 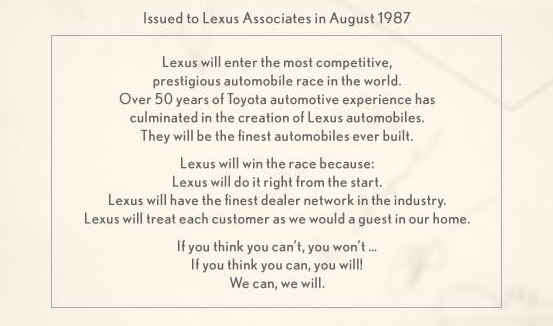 If one randomly asked a stranger: what does Lexus do? They would of course respond make cars. However, the luxury automaker does not see it that way, and after their debuting the SLIDE hoverboard, (which was not the first bit of proof on the subject) others might not either. The Lexus brand is a collection of designers that abide by the L-Finesse philosophy. Their philosophy is to be leading the edge with a healthy dose of finesse. They accomplish this goal with three simple guidelines. Seamless Anticipation: their workers ensure that their product will provide for every whim the customer may have. Incisive Simplicity: pure functional beauty with no fluff. And Intriguing Elegance: which they describe as a “careful juxtaposition of opposing elements.” Lexus as a brand, is so keen on their designer principals, they actually go out of their way to reward others who they deem fit the philosophy. The Lexus Design Awards began in 2012. Instead of being awarded prize money, the designers who take part are eligible for mentorship. Two out of the twelve winners are mentored by Lexus design professionals; Robin Hunicke and Arthur Huang. Furthering their passion for design is INTERSECT by Lexus. The idea is for consumers to be able to experience the brand without having to set foot in a car. Rather, a building designed in some measure by the company. Thus far, one has already been built, while two (one in Dubai and another in New York City) are still in the planning stages. The only functional INTERSECT by Lexus is a 3-Story building built in Tokyo. It was built at least in part by the company, but mostly by famous designer Masamichi Katayama. The space has many uses, including: cafe, bistro, storefront for select Japanese artisans, and art events. Another way Lexus is proving that they are more than an automaker, is their Amazing In Motion campaign. The campaign was inspired by their 2013 Short film project. Amazing in Motion is closer to their automotive home, in that it served as a marketing campaign, but still the products have nothing to do with cars. The Hoverboard that has been making its rounds on the media circuit, was actually the fourth installment, the latest of their Amazing in Motion campaign. It has been, by far, the most successful. Though it was less of an artistic piece and more a video proof of concept. However, if you consider the piece a precursor to hover cars, it might be the most on the nose as far as the Amazing in Motion Ad campaign goes. Before Lexus was an automaker it was a covenant. The Toyota engineers that started the company swore that they would make the finest cars ever. In tune with that idea, the Chief Engineer responsible for the LFA and now the SLIDE; said “[nothing is] impossible, it’s just a matter of figuring out how. The designers at Lexus have built a brand around pushing the boundaries of feasibility, and that is not going to stop anytime soon… if sales figures are anything to go by.