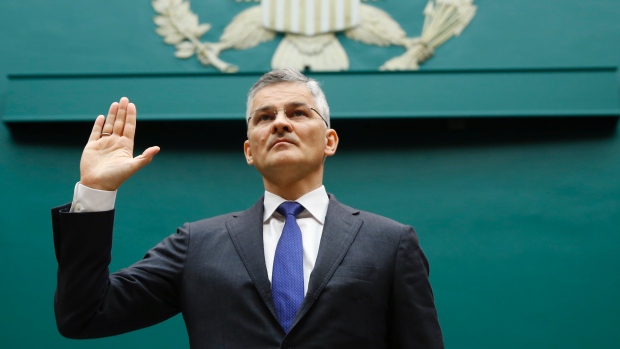 The scandal at Volkswagen has claimed another causality. Michael Horn (as seen during Congressional testimony in October) served as president and CEO of Volkswagen’s North American operations since January 1, 2014, and spent over a quarter century with the company. That wasn’t enough to save Horn, as his long tenure at VW came to an abrupt end on Wednesday. Volkswagen announced that Horn left the company “through mutual agreement,” which sounds like standard corporatespeak for “we let Horn resign in order to save him the embarrassment of firing him.” Horn’s resignation, which will take immediate effect, means that Hinrich J. Woebcken will assume control of Volkswagen USA on an interim basis. Woebcken had previously been tapped to head Volkswagen’s North American region. Horn’s position at Volkswagen has been on tenuous ground ever since the automaker’s diesel vehicle cheating was first revealed to the public several months ago. To be fair, there’s little reason to believe that Horn was directly involved in installing the defeat devices in over 600,000 diesel-powered vehicles in the U.S.—or in the subsequent cover-up. Regardless, as the public face of Volkswagen USA, Horn bore a disproportionate amount of the criticism levied against VW. Another factor that may have worked against Horn was his testimony before Congress, in which the former Volkswagen USA offered up the contrite, but hardly satisfying, admission that his company “totally screwed up.” Despite his numerous mea culpas in the subsequent months, Horn was continually contending with a fresh wave of recalls and recriminations. According to the New York Times, Horn’s ouster hasn’t been received positively by Volkswagen’s U.S. dealerships. Horn had done a good job in cultivating relationships with American dealers and helped assuage their anger over the diesel vehicle recalls by offering favorable buy-back programs and incentives. In a statement, the Volkswagen National Dealer Advisory Council characterized the loss of Horn as a disturbing sign. “We are troubled watching the mismanagement of this scandal from Germany, and how it may impact the ultimate decisions by the authorities in the United States,” the group’s statement read. “This change in management can only serve to put the company at more risk, not less.” Auto Publishers will provide more info on this developing situation as it presents itself.