Crossovers, SUVs and Pickup Trucks Are What’s Hot in the Streets 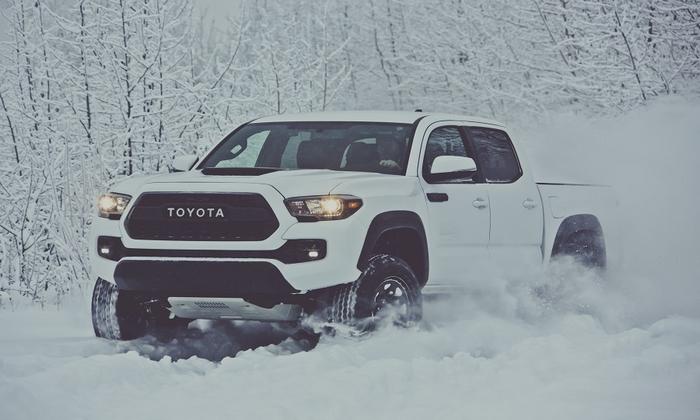 Car buyers can’t get enough of crossovers, SUVs and pickup trucks, and car companies are only too happy to oblige them by pumping those vehicles out as fast as they can. The major automakers displaying their wares at the 2016 Chicago Auto Show emphasized their crossovers, SUV and pickup truck models. Report after report after report from the Windy City indicates that the trend toward utility vehicles is growing as large as the vehicles themselves. Light-duty trucks, including certain SUVs and crossovers, have outsold cars in five out of the past six years, and accounted for over 55 percent of total vehicle sales in 2015, according to The Detroit News. As a result, more and more franchise dealerships are less and less inclined to passenger cars because of their lower profit margins. To wit: The Wall Street Journal recently reported that new car dealers want automakers to produce fewer small cars, coups and sedans in favor of crossovers, SUVs and pickup trucks. In Chicago, Toyota introduced a high-performance, off-road version of its popular Tacoma midsize pickup model at the Chicago Auto Show. The 2017 Tacoma TRD Pro (pictured) sports a 3.5-liter V-6 engine and heavy-duty suspension hardware that enables it to handle extreme weather and rough terrain. As the popularity of off-road capable trucks continues to grow, one can understand Toyota’s excitement about the sales potential of the Tacoma TRD Pro. Last year, light truck market accounted for close to 60% of the total automotive market, according to Bill Fay, Group Vice President and General Manager for Toyota. Toyota recently announced it would increase production of its Tundra and Tacoma models by about 10,000 units this year in order to meet its 2016 goal of 300,000 pickups sold. Given its status as a SUV segment leader, it should come as little surprise that Ford would announce that it’s introducing four all-new SUVs in as many years. As Mark LaNeve, Ford VP of U.S. Marketing, Sales and Service, told Medill Reports, “[t]he trend [toward crossovers and SUVs] is undeniable. Since 2010, small SUV sales have been up by 100 percent.” Even Nissan, an automaker not traditionally known for its utility vehicles, is conceding to popular taste. The Japanese automaker used the Chicago Auto Show to spotlight two of its all-new supersized vehicles: the redesigned 2017 Titan full-size pickup—its first update in over a decade—and the 2017 Armada SUV. Nissan is expanding its pickup line with the goal of upping its piddling 1% market share in the truck segment. “There’s a consumer shift going on [and] we want to take advantage of that,” said Nissan North America Director and Chief Marketing Manager Phil O’Connor. Other automakers with new crossovers, SUVs and pickup trucks in their product lines include Chevrolet, Hyundai, Kia and Ram. Chevrolet and Kia both got into the crossover act as they each unveiled the updated Trax and the all-new Niro, respectively. The bowtie brand also revealed that its mid-sized Colorado and full-sized Silverado Z71 models would receive the Midnight Edition paint job treatment for the 2017 model year. Hyundai offered revamped versions of its Santa Fe and Santa Fe Sport, while Ram announced that it’s releasing a Power Wagon that features a 6.4-liter Hemi V-8 engine. Low interest rates, factory incentives and decreased gas prices make crossovers, SUVs and pickup trucks attractive to consumers. This is despite the fact that the retail prices on such vehicles are higher on average than that of smaller cars. While overall U.S. auto sales this January were depressed when compared to a year ago, SUVs and pickup trucks sold at a fairly brisk rate due in part to the winter storm that recently hit the East Coast. Many automakers are also motivated to ramp up their output of crossovers, SUVs and pickup trucks because they expect gas prices to remain low. As I wrote earlier this month, Fiat Chrysler’s plan to emphasize crossover, SUV and truck production is entirely predicated on the drop in oil and gas prices remaining permanent. While I remain skeptical about the long-term viability of this trend, there’s no question that it’s fueling the current demand (no pun intended) for bigger vehicles. Tim Lawson, Director of Remarketing at Mike Albert Fleet Solutions, sounded the alarm for a potential market correction. “I am excited, but at the same time, I don’t want to see the market become oversaturated,” Lawson told Medill Reports. “If anything happens to the gas price again, then that doesn’t go well for these types of vehicles in the marketplace.” The Chicago Auto Show begins this Saturday, February 13 and runs through the 21st. For more information, visit the Chicago Auto Show site.