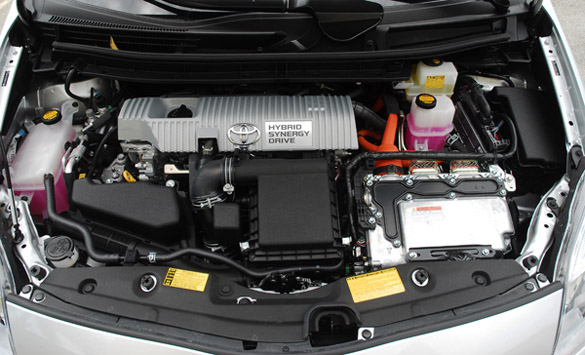 If you own a Toyota Prius and reside in the San Francisco area, then you’ll want to be on the lookout for car thieves who’ve been boldly snatching Prius battery packs. KGO-TV in San Francisco reports that several customers have brought their Prii into Bay Area Toyota dealerships in order to replace their stolen batteries. It’s been enough of a problem that replacement batteries are currently in short supply. According to experts, battery thieves are taking advantage of the high costs for replacements to create a black market. While a new Prius battery can cost almost $3,000, used batteries can be had online for about a third to a sixth of that price. San Francisco police say they’re aware of the problem and are currently taking steps to remedy it. Police have reason to believe that the thefts were performed by professionals with some knowledge of hybrid vehicle technology. The apparent M.O. of the thieves is to smash the rear windows of the Prius, cut the wires that connect the battery, and rip the battery and its modules out of the trunk. Because the batteries are hefty and can cause electric shock, thieves have to take extreme caution in stealing the costly Prius batteries. While exercising caution, the thieves haven’t sacrificed expediency. While a trained technician can remove a Prius battery pack in about an hour, these San Francisco-based thieves have proven capable of removing them in approximately 20 minutes. Because Prius batteries do not have a VIN and are therefore not traceable, they can easily be sold by enterprising battery thieves. However, the primary flaw in their plan, as noted by Green Car Reports, is that most of the batteries have been stolen from third-generation Prius vehicles that aren’t automatically compatible with older-model Prii. Still, this hasn’t lowered the demand for the newer batteries—if anything, it has increased it. With first-generation Prii batteries nearing the end of their charge cycles, some speculate that this recent rash of thefts can be tied to a growing need for replacement power sources. Some speculate that the thieves are taking cells from the newer battery packs and retrofitting them in a battery casing that would be compatible with older Prii. While the current spree of Prius battery pack thefts has mainly been limited to San Francisco, the problem itself is hardly unprecedented. Prius thefts have been observed in areas as diffuse as Sacramento and Long Island City, among others. Regardless, as the largest Prius market in the U.S., California is a key target for crimes of this sort. So until further safeguards are instituted, San Francisco Prius owners are advised to take extra precautions.