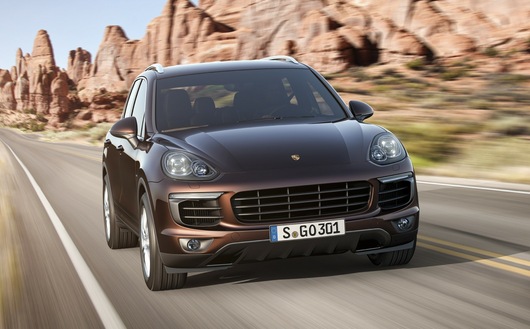 Just when the long-running Scandal at Volkswagen series seemed to be running out of fresh storylines, a new plot twist has been unearthed that is guaranteed to keep automotive news fans on the edges of their seats. On Monday, the Environmental Protection Agency (EPA) slapped Volkswagen with its second notice of violation (NOV) for emissions cheating—only this time, the EPA’s indictment not only targets Volkswagen and Audi but sister company Porsche as well. The EPA is at loggerheads with the German automaker over this new set of Clean Air Act violations. Volkswagen stands accused of installing so-called defeat devices in approximately 10,000 Volkswagen, Audi and Porsche vehicles in order to evade emissions standards, a claim that the company (this time) denies. The VW vehicles cited by the EPA in its NOV include certain SUVs and large sedans with 3.0-liter diesel engines. According to the EPA, the level of nitrogen oxide emitted by these vehicles is nine times over the legal limit. In its second NOV, the agency identified the following VW models: • 2015 Porsche Cayenne (pictured) • 2014 Volkswagen Touareg • 2016 Audi A6 Quattro • 2016 Audi A7 Quattro • 2016 Audi A8 Quattro • 2016 Audi A8L Quattro • 2016 Audi Q5 Quattro If the EPA’s accusations are true, the Volkswagen brand would be vulnerable to further erosion of consumer confidence, not to mention criminal liability. It’s no wonder that Cynthia Giles, the EPA’s Assistant Administrator for the Office for Enforcement and Compliance Assurance, struck a condemnatory tone in her remarks yesterday. “VW has once again failed its obligation to comply with the law that protects clean air for all Americans,” said Giles in an EPA-issued statement. “All companies should be playing by the same rules. EPA, with our state, and federal partners, will continue to investigate these serious matters, to secure the benefits of the Clean Air Act, ensure a level playing field for responsible businesses, and to ensure consumers get the environmental performance they expect.” Insiders say that the EPA had been frustrated with Volkswagen’s lack of communication with the agency since the initial emissions scandal first broke in mid-September, although relations between the two recently began to improve. Both the EPA and VW are currently engaged in talks to repair VW vehicles sold in the U.S., but a recall schedule hasn’t yet been determined. While the EPA is holding the automaker responsible for fixing the emissions systems of the VW vehicles referenced in its latest NOV, it hasn’t yet required dealerships to suspend sales of these vehicles, or for owners to cease driving them. The Volkswagen Perspective For its part, Volkswagen strenuously denies the charges levied by the EPA. In a statement, the company emphasized “that no software has been installed in the 3-liter V-6 diesel power units to alter emissions characteristics in a forbidden manner.” It added that it would “cooperate fully with the EPA to clarify the matter in its entirety,” although it wouldn’t elaborate any further on the matter. Volkswagen seemingly struck a defensive tone in its comments about the latest emissions allegations. A VW spokesperson quoted by the Wall Street Journal even questioned the EPA’s motives in issuing the NOV. “It is a permissible software,” he said. “What’s at issue here is clear: Does the U.S. want competition in the American market or not?” At the same time, the Volkswagen flack was careful to strike a conciliatory tone: “We have senior engineers on the scene who are dealing with the agency every day. Our head of engine development is on his way to the U.S. right now to clarify things.” Volkswagen’s current position is that it won’t cease sales of the vehicles singled out by the EPA in its latest NOV. In September, the Wolfsburg-based automaker recalled 482,000 VW diesel vehicles sold in the U.S. that contained emissions-cheating defeat devices. In total, VW is responsible for repairing nearly 11 million vehicles worldwide in accordance with environmentally responsible limits. It’s worth emphasizing that this new iteration of the Volkswagen scandal also drags Porsche—the previously untarnished crown jewel of the VW lineup—into the mud as well. Also of note is the fact that the Porsche line was formerly headed by now-current VW CEO Matthias Mueller. Company bigwigs like Mueller and former CEO Martin Winterkorn have consistently denied any knowledge of the scheme. However, as more scandalous details get unearthed, those denials become less and less credible by the day. For more on the developing Scandal at Volkswagen plot, be sure to read Auto Publishers.