Seinfeld Set to Sell Three of His Vintage Porsches 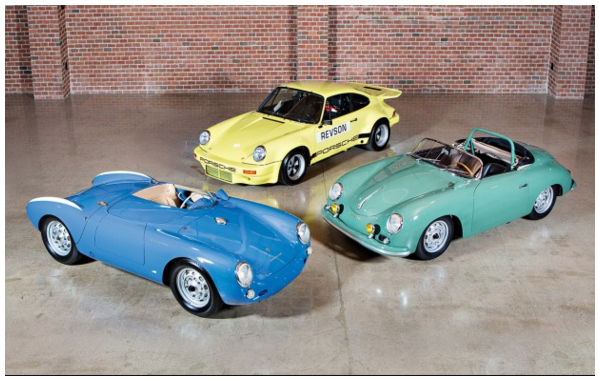 Earlier today, we reported on Jay Leno auctioning his custom F-150 Harley Davidson truck for charity. Now another famous car-loving comedian is selling off some of his choicest rides to some deep-pocketed Porsche lovers. Jerry Seinfeld will auction three Porsches from his personal collection: a 1955 Porsche 550 Spyder, a 1958 Porsche 356 A 1500 GS/GT Carrera Speedster and a 1974 Porsche 911 Carrera 3.0 IROC RSR (pictured). The star of Comedians in Cars Getting Coffee (along with a little sitcom you may have heard of called Seinfeld) says his primary motivation for auctioning his vintage Porsches is to share his love of these vehicles with someone who would appreciate them. “I’ve never bought a car as an investment. I don’t really even think of myself as a collector,” Seinfeld said. “I just love cars. And I still love these cars. But it’s time to send some of them back into the world, for someone else to enjoy, as I have.” Gooding & Company, one of the world’s leading auction houses specializing in vintage vehicles, will handle the auction for Seinfeld’s Porsches. Here are a few facts about each of the three Porsches on sale: The 1955 550 Spyder ranks among the most coveted sports cars Porsche has ever produced. Since Seinfeld bought it about a decade ago, this distinctive bright royal blue racecar with white stripes has been featured in such events as the 2009 Los Angeles Auto Show. On a sadder note, the 550 Spyder was also the model James Dean drove when he died in an auto accident in 1955. The 1958 356 A 1500 GS/GT Carrera Speedster is extremely rare—in fact, only 151 of them were ever produced. This Carrera Speedster is even rarer, as it was the only vehicle of its type to receive a spring green paint color called Auratium. The 1974 911 Carrera 3.0 IROC RSR was commissioned by auto racing legend Roger Penske in the early 1970s for his International Race of Champions (IROC) series. This canary yellow beauty was driven in the IROC series by such motorsports legends as Peter Revson, Gordon Johncock and George Follmer, and has since participated in several vintage races. If you plan on putting in a bid for one of these vintage Porsches, be prepared to bring your checkbook, as each vehicle is expected to go for seven figures, which doesn’t include the $200 fee just to register for the event. Also, be sure to book a trip to Florida, as the Porsches will be sold in the Amelia Island Auction on March 11. Image Credit: Gooding & Company