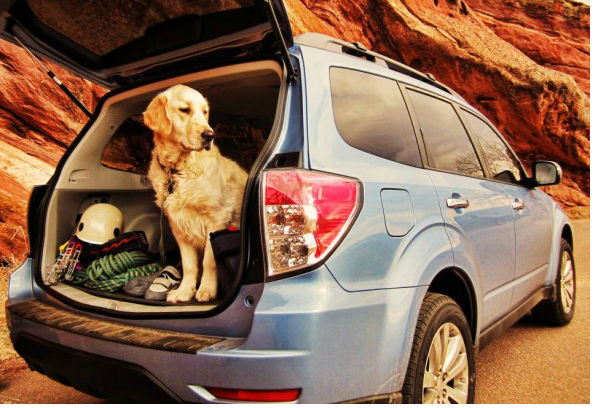 Subaru has always tried to bill themselves as pet friendly. Many of their commercials feature dogs, and the back of their wagons and SUVs are supposedly ideal for ferrying forth furry friends. Recently, they took a step beyond ads, and took the initiative to go beyond what any other automaker has done for pets. Subaru and the Center for Pet Safety (CPS) have gone out and actually tested pet carriers and crates in crash scenarios. The Center for Pet Safety began is an entity that takes time out, to do consumer reports and tests for various pet products. They are a non-profit consumer advocacy, testing everything from car harnesses to chew toys. The Center for Pet Safety started because of a dog named Maggie. The founder of the company Lindsay A. Wolko had a black cocker spaniel that was tragically injured because of a subpar harness. She bought the harness because Maggie was relentless during car rides, moving to about and being a general distraction. The harness bought to protect her did more harm than good in an accident. Wolko responded by going out of pocket and buying a dozen commercial harnesses available at her local pet store. When she took them to a crash testing site, propitiously placed within 8 miles of her house, the results left her in tears. All four of the initial batch were woefully ineffective. Any one of them would have left the whatever animal inside seriously injured at least. One of the products claimed to meet or exceed safety standards; it decapitated the inanimate crash test dog. However, the company that made the harness was not lying. Pet products are not considered ‘consumer products’, therefore they are not required to pass any quality control tests. The Center for Pet Safety was founded in 2011. In March 5th, of 2013, they partnered with Subaru to Crash test safety products for pets; namely crates, carriers, and harnesses. The results of the first tests garnered some accolades and credibility for both the organization and pet car safety in general. The results of Subaru and the CPS’s independent testing was released in October of 2013. The top performer was Sleepypod Clickit, it was also the only product that was even mentioned. I suppose it is both a testament to how fantastic Sleepypod products are (they crash tested their products before long Subaru and the CPS ever did), and to how sadly disinterested the competition is in testing their products. Or maybe the CPS standards are absurdly stringent. This year, in April, the partnership announced that they were starting the next round of tests. The 3 top performers were announced on Subaru’s US media center. The award of top crate went to Gunner kennels, for their G1 intermediate with tie down straps. Two companies tied for best carrier: Sleepypod Mobile Pet Bed and PetEGO Forma Frame Jet Set Carrier share the award. In July the Subaru financed duo introduced that they would start awarding CPS certifications. Thus far only Sleepypod Clickit Sport has made the list, but in every weight class. It seems that the CPS and Subaru will have a long future of crash testing crates, carriers, and harnesses together.