Takata Corporation: Blood in the Water 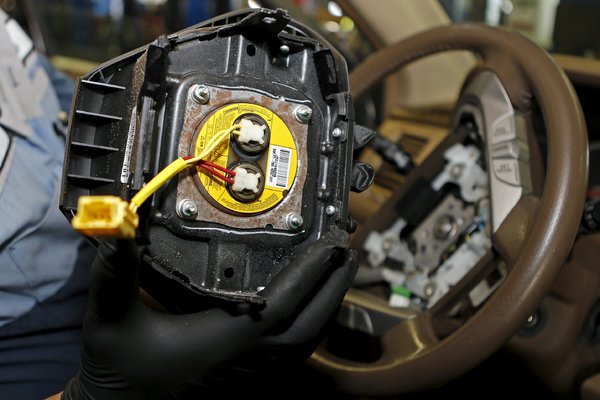 A relatively unknown contractor for airbags went from niche notability, to household name for all the wrong reasons; a recall has cut Takata Corporation so deep that it may never recover; sharks in the water smell blood, and there is not a single life raft in sight. By now everyone has heard about the claymore airbags (something like this with a higher propensity for casualties (Explicit language warning)). Airbags, in all manner of cars, have been going off with superabundant ferocity. So much so, that the metal casing and bits of plastic have been ripped from the appropriate locale and lodged into new orifices that the projectiles made, typically on human subjects. Because of this startling revelation, a record for recalls has been set, 34 million cars across at least 11 auto brands. A wave of recalls have inspired a whole new era of National Highway Traffic Safety Administration (NHTSA) oversight. 2014 was considered the year of the recall, but 2015 is not too far behind. The efforts are well received. So much so, that the government is considering actually giving the NHTSA more money, so they can continue to prevent people’s untimely deaths. It should be mentioned, Takata Corporation did not put the delinquent team on its back single handedly; General Motors (GM) definitely chipped in with their far bloodier recall, though they were able to wash most of it it off with a little liquidation water. GM; for those with a life, not following obscure news reports; set a record with their recall in the first half of last year. Over 11 million of their models had to be recalled (which was not the obscure part, everyone heard about that), this was in early 2014. Here is where the obscurity comes to play, GM, the NHTSA, and an amount of news publications (how many is irrelevant) knew about the issue years before the recall, it was not until “11 people” (the number was rage inducingly higher (officially 124, likely over 350 (for perspective))) died, that anyone did anything. More obfuscated, and acrimoniously sinister, is the fact that after the recession, what was (old) GM was liquidated (for a profit), while a new company was made in its place, new GM. A judge ruled in July, that since new GM was merely an accumulation of assets, they were not responsible for old GM’s mistakes. Which are buried in GM’s tomb, like an inept Egyptian Pharaoh. While GM made it out like Michael Jackson, the Japanese safety supplier has more of a Bernie Madoff situation going. GM is still thriving in a comfortable third place in the global automotive market, while Takata Corporation is striving for sustainability. They are struggling to even replace all their defective airbags. There are more than 19 million claymores still on the road waiting for an accident to light their fuse. All companies that once supported the safety specialist’s growth are beginning to distance themselves. For example, Toyota has found a new supplier to replace their faulty airbags, Nippon Kayaku. The small(er) supplier will provide 13 million replacement airbags so the company can get back to its typical prowess. Honda wishes it could get away, but they were the automaker most affected by the rounds of recalls, they are even on the hook with Takata in legal proceedings. Even Volkswagen might be joining the affected auto manufacturer list, as a 2015 Tiguan had an apparently similar extra explosive discharge. However, there is no official information regarding that particular airbag issue yet. Interestingly, despite their blood filling the water around them, Takata Corporation is sticking to their manufacturing guns. They have not even curbed the production of ammonium nitrate based inflators, which is literally the core of the catastrophe. Humidity turns a t-shirt cannon (airbag) into a shotgun (literally).