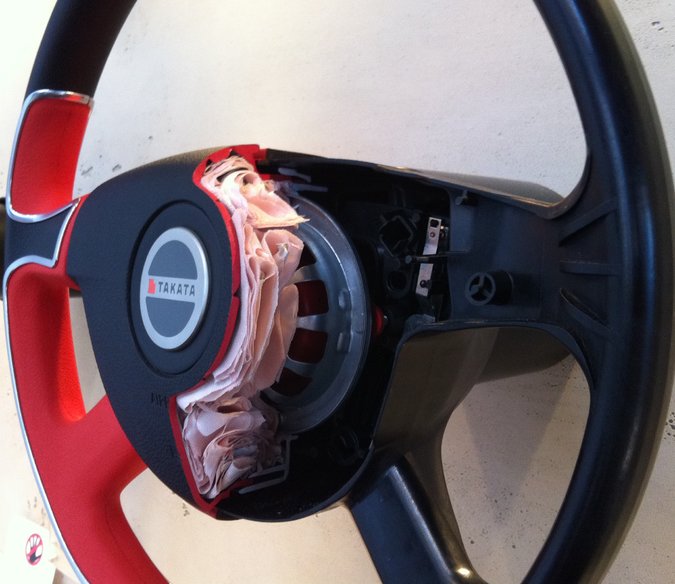 Takata Corporation is a company contracted by many car manufacturers to provide safety features for their cars. Their creed is to live in “a society with zero fatalities from traffic accidents.” To their credit they have made some great strides in the right direction to achieve that goal. Takata Corporation has a hand in every safety feature in modern cars; from airbags to seat belts and steering wheels; they make it all. The safety manufacturers are not only concerned for driver safety, pedestrians and passengers have exterior airbags and child seats respectively. In fact, they were recipients of the 2014 Family and Kids Plus X Award for their Maxi car seat. Though, it should be mentioned; that is the only announcement on the Takata Corporation’s website for 2015, as recall troubles have continued to take their toll on the company’s public Image. While the 2015 post was of a lighter fare, the second half of 2014 has been plagued with every company’s most feared topic, recalls. The first countermeasure was enacted by Honda. Three reports came in throughout 2007 about faulty driver side airbags, so the Auto Manufacturer went directly to their sub-contractor Takata Corporation. In 2008 the duo announced that they were recalling Hondas made from 2000-2001 after determining the problem stemmed from inflator ruptures. Until 2010 both companies were part of a mad dash to identify the root problem to no avail; according to their testimony to the Senate Committee on Commerce, Science, and Transportation. Before that point the research was focused on problems stemming from manufacturing issues. Few recalls came in from 2009 to 2012, but it ultimately led to another recall in 2010 exclusive to Asia, this apparently being when the link between moisture and rupture was discovered. However, this is directly opposed to a troubling statement made by a previously anonymous source who has continued accuse the Takata Corporation of negligence. There seems to be a similarity between the recently prominent subcontractor recall and last year’s General Motors recall, in that both companies were apparently forewarned. George R. Neff has finally stepped into the limelight after months of anonymity. In a recent New York Times Article, the President of IsoVac, said that in the early 2000s, he warned that Takata Corporation’s testing techniques were obsolete, his advice was to upgrade to radiation-based testing. He also told the company that the airbag prototypes were already being affected by moisture due to faulty inflators not being airtight. He concluded that inflators would yield airbags at 100 percent equilibrium in under five years. Former Autoliv Engineer Karl Rink thought the problem was even worse, the airbags “should all be recalled.” As predicted all the initial recalls were in high humidity areas. The underlying problem is the propellant that within the airbags, ammonium nitrate is too volatile. When extra moisture is introduced into the equation the blast pressure is increased, ultimately resulting in at least 6 deaths and 100 injuries due to airborne shrapnel. So why would Takata Corporation continue using ammonium nitrate after not one, but two industry professionals went on the record to say that the prospects are troubling in the long run? At the end of the day, profits are all that matter. Ammonium nitrate is cheaper and it allows Takata to undercut subcontracting competition. Now that Nissan and Toyota have issued a full recall of over 6 million cars joining the 13 manufacturers already on the list, the company is pleading for a payment plan to be able to comfortably cover the fines that accrued as they dragged their feet to remedy the problem. If the allegations are true, and Takata Corporation knew in 2004, that is criminal negligence at best, and a fine is light sentence.