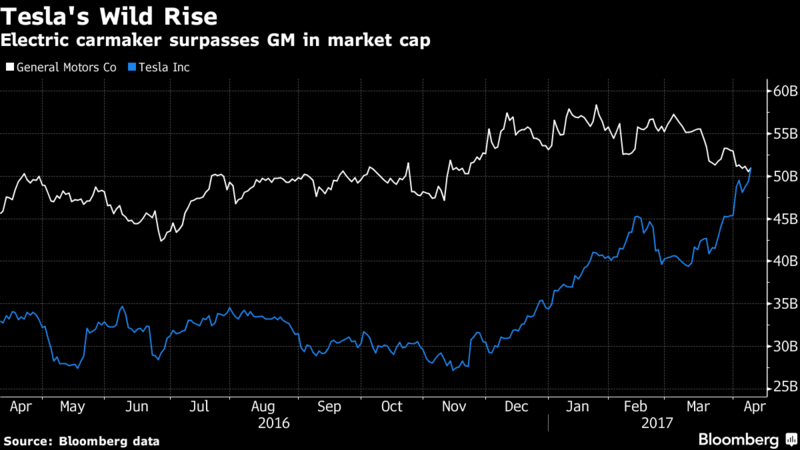 Tesla, Inc. has just passed General Motors, Co. as the most valuable car maker in America, thereby effectively stealing the limelight from the company that once ruled the automotive market of the United States.

As of Monday morning, Tesla climbed as much as 3.5 percent in early trades of the day and has boosted its market capitalization up to $51 billion. At 9:35 a.m. Monday morning, the company was valued at approximately $1.7 billion more than GM in New York. Since then, the two automotive manufacturers have been jockeying for the lead in trading.

The change in fortune for Tesla reveals how deeply investors believe in Elon Musk's vision for his electric vehicles. According to Musk, electric cars will one day "rule the road." Although GM beat Tesla to market with a plug-in Chevrolet Bolt, the 109-year-old company has yet to match the enthusiasm and optimism displayed by its much smaller U.S. peer.

Alexander Potter, an analyst at Piper Jaffray Cos., commented on the Tesla spirit. "Tesla engenders optimism...defiance...and a host of other emotions...that other companies cannot replicate," he said. Potter upgraded the stock after owning a Tesla himself for nearly a year and a meeting with management. In Potter's view, companies that are racing to catch up to Tesla are only making themselves appear desperate.

Tesla passed GM about a week after surpassing Ford Motor Co. and instigated a debate on the value of Musk's company compared to other top-selling automakers across the world. GM is expected to earn more than $9 billion this year. According to analysts, Ford is predicted to generate an adjusted profit of approximately $6.3 billion. Tesla is expected to lose more than $950 million.

If Tesla can close at a higher valuation than GM, it will hold a place as the sixth-highest valued automaker by market cap, preceded by Toyota Motor Corp., Daimler AG, Volkswagen AG, BMW AG and Honda Motor Corp. Although Tesla has quite a way to go to match Toyota's market cap of $172 billion, Honda is only a step ahead at approximately $52 billion.

Morningstar Inc. analyst David Whiston says the market is more interested in new market value of the other businesses Tesla is associated with than real profits or cash flow. According to Whiston, there is nothing preventing Tesla's momentum. "They could pass Honda, too," he said.

Investors in Tesla have been betting on the company's ability to dominate the market for electric cars and energy storage. To these investors, GM and Ford are headed for a reduction in car sales and decreased profits.

Tesla delivered less than 80,000 vehicles across the globe in 2016. Compared to GM's figure of more than 10 million, the automotive manufacturer has quite a bit of work to do. The new Model 3 sedan is slated to roll out later this year and is expected to sell for around $35,000. The success of the new model is critical to Musk's desire to rise from a niche car maker to a mass-market auto manufacturer.