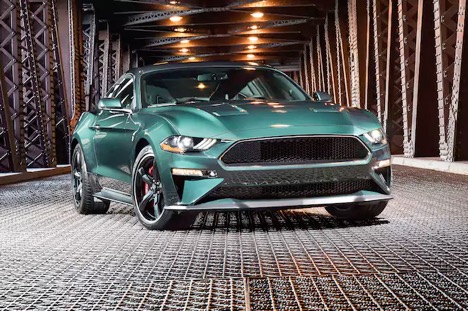 Every once in a while, Ford likes to bring out the Mustang Bullitt. This special-edition Mustang is coming out again to honor the popular Steve McQueen movie “Bullitt,” which is celebrating its 50th anniversary. The Bullitt was first made available in 2001, and then returned for the 2008 to 2009 model year.

Designed after the 1968 Ford Mustang driven by Frank Bullitt, Steve McQueen’s character, the 2019 Mustang Bullitt expands on the features included in the Mustang GT Premium edition. The Bullitt comes loaded with Ford’s Performance package, as well as features upgrades like a Torsen limited-slip differential, Brembo six-piston front brakes and a bigger anti-roll bar in the rear of the vehicle.

It also has a larger radiator to keep the special edition car’s 5.0-liter V-8 engine cool when it's racing along the open road. The engine needs extra cooling because the Bullitt puts the pressure on due to an intake manifold snagged from Ford’s Shelby GT350. Along with these speed-enhancing goodies, the Bullitt also has a recalibrated powertrain control module.

The Bullitt’s engine emits 475 horsepower, allowing the car to reach a top speed of 163 miles per hour while its torque is 420 pound-feet. The Bullitt comes with a six-speed manual transmission.

To embody the essence of the car from the original movie, Ford decided to remove almost all of the exterior emblems. In fact, just one single badge is mounted to the vehicle model’s trunk to connect the Bullitt to the film. The badge’s design mimics the appearance of the original car’s fuel-filler cap. Ford's design team has added chrome around the grille and the muscle car’s window line. Car buyers can purchase the vehicle model in Highland Green, which is like the color of the Mustang in the film, or Shadow Black.

The interior of the Bullitt features a few movie hints, displaying its inspiration. For instance, it has green stitching throughout the leather interior. The shift lever has a white cue-ball type grip, adding more classic styling to the automobile. There’s also a special graphic placed inside the Bullitt’s 12-inch digital gauge display.

Ford is offering few options with the Bullitt, but car buyers can upgrade the vehicle with an adaptive suspension and Recaro seats. A special electronics package is available with the model, and those who upgrade their cars to include it will receive a blind-spot monitoring system as well as a rear cross-traffic alert system.

Fans of the Mustang will enjoy owning this special edition automobile. It has the speed, looks and exclusivity to be a keeper. The 2019 Mustang Bullitt is a car designed for those who have an appreciation for cinema history and technological advancements in today’s auto world.