The 2019 Toyota RAV4 Manhandles the Competition 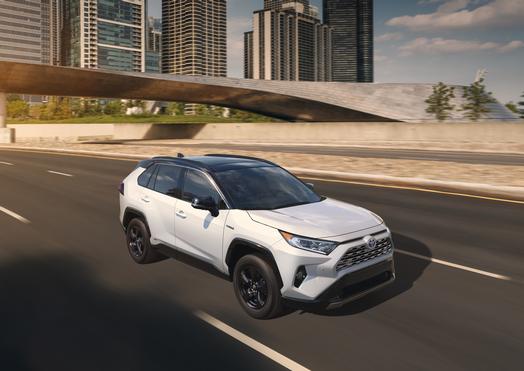 The 2019 RAV4 is the model’s fifth generation. This Toyota vehicle is the model responsible for the popularity of the small crossover segment, and it continues to be the best-selling model in the category. In designing the 2019 SUV, Toyota added a few styling tweaks that are sure to appeal to those who are in the market for a small SUV.

The SUV’s length is slightly shorter than last year’s model, but the wheelbase is 1.2 inches longer. It is also 0.4 inches wider. Updating the size was possible because the carmaker used a larger chassis and a new platform. Toyota also decided to increase the height of the RAV4 by more than half an inch. The car company was able to do this without impacting the vehicle’s aerodynamic efficiency. This subtle design move gave the vehicle a bolder stance, one that’s sure to capture the attention of car buyers.

Toyota’s RAV4 line comes with a new 2.5-liter inline-four engine and an eight-speed automatic transmission. The carmaker’s five gasoline fueled engines will give drivers a 15 percent increase in horsepower. Toyota hasn’t released fuel economy numbers for the small SUV yet, but according to Toyota’s officials, the vehicle will offer best-in-class fuel economy.

The XSE Hybrid will be the swiftest of the RAV4’s nine trims. Toyota is working to dispel the image of its hybrids being more economical to operate than fast, and it’s doing so without making any compromises. The design team moved the battery pack to a location underneath the rear seat so that vehicle owners would have access to all of the available space in the cargo area. With the 2019 XSE Hybrid, the battery hump has been retired.

Changing to a bigger chassis was a good move because Toyota was able to give the vehicle’s occupants more headroom and more overall space. The change also resulted in 19-inch wheels being available on the SUV for the first time ever. Toyota also added more technology to the vehicle. Just the safety additions alone increased the weight of the SUV by 45 pounds. However, the new platform allowed the design team to trim the RAV4 in other areas, so its overall weight is now 4 percent less.

The 2019 RAV4 comes with all-wheel drive, and Toyota decided to up the technology of this feature by including Dynamic Torque Vectoring with Driveshaft Disconnect. This technology gives drivers actual torque vectoring that comes with a differential that is able to overspeed a wheel. It also directs up to 50 percent of the vehicle’s power to the rear wheels and can send more power to individual wheels when conditions call for it. With the 2019 RAV4, Toyota has definitely issued a challenge to its competitors by offering buyers a quality vehicle, one that they’ll want to drive.