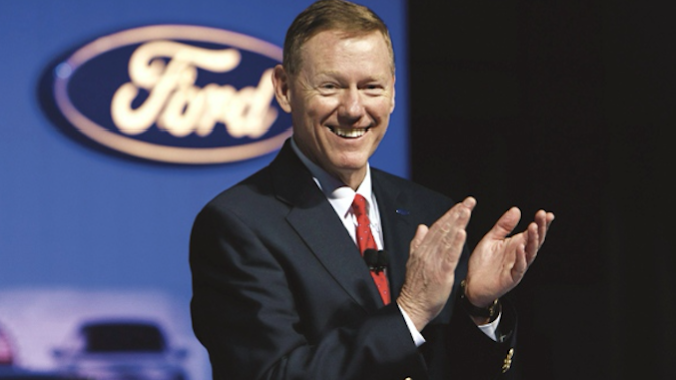 Next month, the former CEO of the Ford Motor Corporation, Alan Mulally, will receive the honor of being inducted into the Automotive Hall of Fame. When bankruptcy hung over the company in 2006, Mulally mortgaged everything possible to fund a complete overhaul of Ford’s product portfolio. This step kept the company out of bankruptcy. He even mortgaged the carmaker’s blue oval.   Ford hired Mulally as its CEO during the fall of 2006. At the time, he was given the task of transforming the company’s conflict-ridden corporate culture. He was also put in charge of saving Ford from disastrous financial trouble. Michelle Krebs, a senior analyst for Autotrader.com, said, “Ford was so close to the edge when Mulally came in. Some of the recovery plan was in place, but he was the one who executed it. Were it not for him taking over, the Ford we have today just wouldn’t be the same company.”   The Automotive Hall of Fame is inducting Mulally because he was responsible for “one of the greatest turnarounds in American business history.” Based in Dearborn and established in 1939, the Automotive Hall of Fame has honored approximately 800 men and women who have had a profound impact on the auto industry. Alan Mulally will receive his award from the organization on July 21 in Detroit. William R. Chapin, the Automotive Hall of Fame’s president, said, “We are pleased to induct four individuals whose entrepreneurial spirit helped create today’s global automotive industry."   To overhaul the auto company’s corporate culture, Mulally implemented frequent business plan review meetings. He required the attendance of top executives and held them liable for any problems that Ford was having with product launches. During these meetings, Mulally used a color-coded grading system. To determine projects that were on target, the system used green. Red was the chosen color for projects that were dealing with major issues. This helped Mulally and his staff determine when problems were occurring.   The successful CEO established the company’s “One Ford” plan, which standardized specific elements of the vehicle. Mulally also brought about a global architecture for Ford’s cars. Krebs said, “He brought an accountability to Ford that I don’t think existed before. Much of that discipline remains today.”   Under Mulally’s guidance, the car company posted a full-year of profits in 2009. This was the first time that the company had been able to do so since 2005. Ford was also able to pay off billions of dollars in loan debt before it was due. The company was even able to return its standing to investment grade status. Because of its comeback, Ford regained access to the trademarks and property that it had previously put up for collateral.   Ralph Nader, the automotive safety advocate, and Bertha Benz, the spouse and business partner of Karl Benz, the founder of Mercedes-Benz, are also being inducted into the Automotive Hall of Fame this year as is Roy Lunn. He designed the Ford GT40.