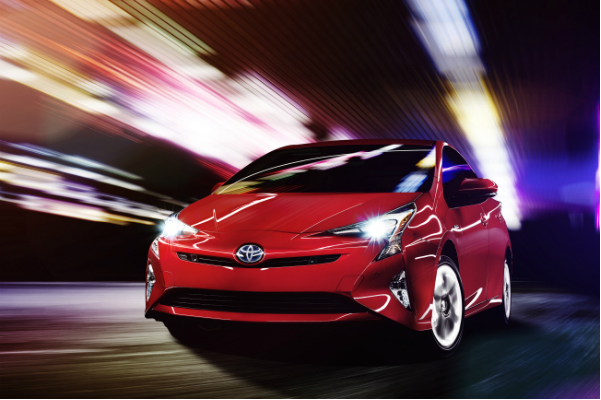 The Toyota Prius is unarguably one of the most important cars of the generation, and quite frankly, ever. When it was released in 1997, it was ahead of its time, as gas prices had not yet justified its existence. However, gas prices soon skyrocketed and the Prius enjoyed a behemoth of a boost in sales. It was so successful, that it alone accounts for over 40 percent of hybrid sales. Unfortunately, lately hybrid sales have been heavily waning. The Toyota Prius has not been immune to this dip in sales; in response the company has redesigned their popular hybrid vehicle with a first ever emphasis on fun. The remodeled hybrid was unveiled today in Las Vegas. Right off the bat, everything pointed to Toyota’s new intention, to steal sellers away from other brands by retooling the Prius’s boring image. And that is not only a testament to the styling which is bonkers at best. The aesthetics on the Prius are not a first for Toyota, beyond the fun theme, it is very visually polarizing, which the once top selling company has been inching towards for a while now. The most apt way to describe the new Prius, is edgy. Similar to the Mirai, the new Prius exudes angles, and Toyota went to long lengths to show everyone. In fact, the teaser picture of the new Prius was simply a question mark/grim-reaper-scythe-style rear brake light. Interestingly, the tail light is actually not the most far facet of the hybrid’s appearance. The front end of the Hybrid is jarring. The headlights loosely resemble a predatory bird dropping a fish that it had scooped up for dinner; the fish being the fog lights and the head and directional lights forming the aforementioned bird. To accommodate this outlandish light design, the hood, grille, and bumper have become increasingly aggressive (a word I never thought I would use to describe this particular Hybrid). The nose is so much lower than before, that it is actually level with the FR-S. The fourth generation Prius is quite an advancement for the renowned hybrid. It is actually an improvement in every way, including aesthetically (I’ll take interesting and unappealing to many, over boring and ugly to all any day). Like the first generation, the fourth is paramount for the Prius name. Not only does it have to compete with feisty formidable foes like the no other generation has had to before, but it is the first of millions of cars that will be sharing Toyota[’s] New Global Architecture (TNGA). Conspicuously, TNGA makes the new Prius, lower, longer and wider than its previous iterations. However, it also makes the car stiffer, safer, and more stable than its older brothers. That is what is where the 'fun' comes in. The world’s only fourth generation hybrid is supposedly a pleasure to drive compared to its frumpy brethren, it even has double wishbone rear suspension. On that same front, Toyota managed to coax 15 more powers out of its horses, while making them more efficient in every way. The new Prius has 150 horsepower, which is about average for entry level vehicles. The extraordinary aspect is that the engineers: achieved 40 percent peak thermal efficiency, condensed the battery pack, and boosted the miles per gallon by 10 percent. The looming question remains; will these changes be enough to revert the 17 percent drop in sales? It is too soon to tell, the full release will be at the Tokyo Motor Show in a few months time. This preliminary first release, might give the engineers a chance to retool the questionable styling of the admittedly funner Toyota Prius; many have been strikingly critical of its ostensible presence.