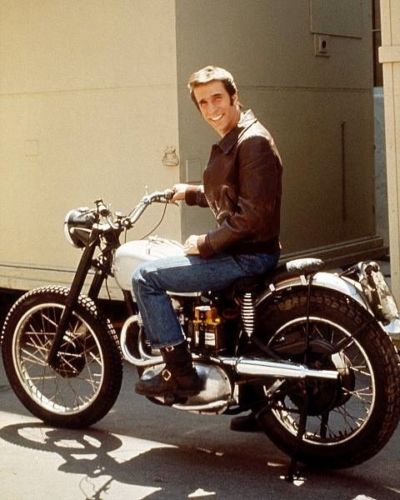 A list of the coolest characters in television history wouldn’t be complete without Arthur Fonzarelli, aka The Fonz. As star of the classic TV show Happy Days, Fonzie helped make being a biker hip with his Triumph motorcycle . Now you can own a piece of television history—that is, if you have 100 G’s burning a hole in your pocket. An eBay seller is looking to fetch $100,000 for the legendary 1949 Triumph Trophy 500 belonging to The Fonz. Legend has it that the Happy Days producers chose the Triumph Trophy 500 because Marlon Brando’s character rode one in The Wild One. All things considered, I’d say they made the right call. The task of customizing a Triumph motorcycle cool enough to be ridden by the Fonz was entrusted to famed stuntman and motocross race Bud Ekins. Ekins removed the front fender, replaced the handlebars and spray painted the tank silver. And the rest, as they say, is television history. After Happy Days went off the air in 1984, Ekins took possession of the Fonz’s Triumph motorcycle. In 1995, Ekins sold the Triumph to his friend Marshall Ehlers, who didn’t realize it was a part of television history. By 2011, it ended up as a high-profile lot for the Bonhams auction house, where it sold for $87,500. The ironic part is that the actor who portrayed The Fonz, Henry Winkler, was deathly afraid of the Triumph motorcycle on set. In 2009, Winkler told an interviewer that he was so inept at riding it that he nearly killed some people on set. In fact, if you watch old Happy Days episodes, you’ll notice that Winkler is usually standing by or near his Triumph motorcycle, as opposed to on it. With that said, whoever snags this Triumph motorcycle won’t be buying it to ride. In fact, the bike hasn’t been ridden since the show went off the air over thirty years ago. But it’s an ideal purchase for collectors who want to borrow some cool from one of TV’s most iconic characters. What might the Happy Days Triumph motorcycle fetch in auction this time? Let us know in the comments!