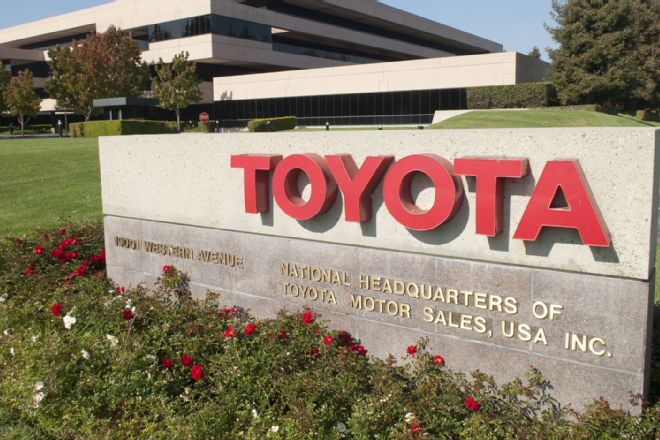 Toyota is in the process of establishing guidelines for its U.S. based dealerships that will prohibit below-invoice pricing of its vehicles in print, broadcast or online advertising, according to an Automotive News report. Dealer reps that were interviewed for the story say that the guidelines are scheduled to take effect in January. Dealerships were informed by Toyota that they would face stiff penalties if they violated the new pricing edict. Among the potential penalties include a loss of incentives under Toyota’s Delivery Allowance Program, which pays dealers for providing a proper delivery of a new vehicle to consumers. As you can imagine, dealership reaction to Toyota’s proposed policy is mixed. Some Toyota dealers quoted by Automotive News praised the move, saying that enforcing a standard on vehicle prices will result in increased gross profits. Other dealers, however, argue that the revised Toyota policy is bad for the customer and hurts high-volume dealerships. Toyota is following in the footsteps (or is that tire treads?) of fellow Japanese automaker Honda, which instituted a similar below-invoice pricing policy earlier this month. Honda established a Compliance Headquarters in order to track the marketing activities of its dealerships and to punish dealerships that violate the company’s strict restrictions on vehicle advertising. For dealers that market its vehicles below invoice prices, Honda has a “three strikes” policy—any dealer that accrues three such violations in a single calendar year can lose its marketing assistance, which can be up to $400 per vehicle. In a nutshell, a vehicle’s invoice price is the cost a dealership pays directly to the automaker. This is opposed to the MSRP, or manufacturer’s suggested retail price, which can be as low or 3% or as high as 10-15% depending on the vehicle. Typically, dealers are willing to negotiate the MSRP price in order to liquidate its inventory as quickly as possible. Dealerships might even come out ahead if they sell certain vehicles at below-invoice prices depending on its current Kelley Blue Book value, particularly if said vehicle is likely to depreciate in value the longer it sits on the lot. Therefore, dealers may feel incentivized to rely on below-invoice pricing strategies in order to move a vehicle as soon as possible. While this may benefit the individual dealer, the automaker itself is of the position that below-invoice pricing can dilute its brand. Toyota says it will provide further details of its below-invoice pricing plan at its national dealer meeting in Las Vegas this September.