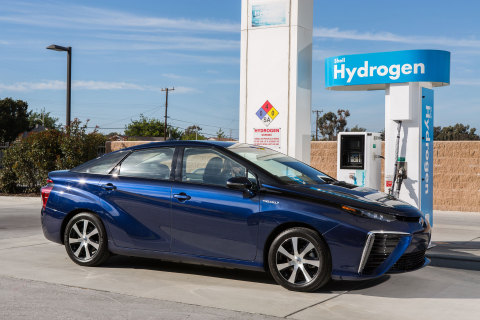 If you’re a California resident who can’t wait to get behind the wheel of a Toyota Mirai, you’re in luck. Eight dealerships in the Northern California area will carry the eagerly anticipated hydrogen fuel cell vehicle by October 2015, according to Toyota. A total of 200 Mirai cars will be carried by these eight dealerships: Longo Toyota, Roseville Toyota, San Francisco Toyota, Stevens Creek Toyota, Toyota of Orange, Toyota Santa Monica, Toyota of Sunnyvale and Tustin Toyota. Toyota says that these dealerships were chosen due to their experience with advanced technology vehicles like the Mirai, as well as their proximity to hydrogen fueling stations. The automaker is making a concerted effort to market the Mirai, launching a Fueled by Everything campaign to educate the public about hydrogen vehicle technology. Approximately 3,000 Mirai units will make it to dealership floors through 2017. But if you’re someone who can’t wait that long, customers can begin pre-ordering their Mirai vehicles by visiting the official Toyota Mirai website. Supplies are limited, so reserve your vehicle today! Looking for a dealership in Northern California or Bay Area? With Auto Publishers, you can find new or used vehicles at a Toyota dealership near you. Just enter a vehicle make and zip code into Find a Dealer and it will connect you with a local dealership that offers the car you want at an affordable price!