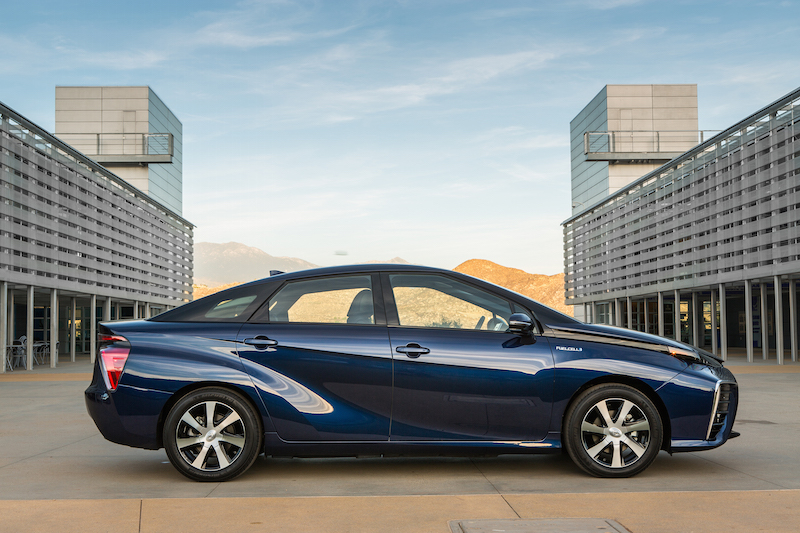 In the midst of Fourth of July celebrations, most may have missed the (metaphorical) fireworks Toyota launched at this year’s Aspen Ideas Festival in Aspen, CO. It was there that Toyota North America CEO Jim Lentz announced a startling breakthrough in electric vehicle technology. The Toyota Mirai set a zero emission electric vehicle record with an EPA-estimated driving range of 312 miles on a single round of hydrogen fuel. Currently, this makes the hydrogen fuel cell-powered Mirai the world’s only zero emission vehicle to exceed a range of 300 miles. Toyota also claims that the Mirai “will offer an EPA-estimated 67 miles per gallon equivalent (mpge) city/highway/combined.” The previous record holder for longest-range electric vehicle was the Tesla Model S 85D, which achieved 270 miles in a single jaunt. The Model S is an electric vehicle, which means that it runs on a battery-powered motor and is fueled by electricity rather than gasoline. While the hydrogen fuel cell powered Mirai is a type of electric vehicle, its power source is a hydrogen fuel cell rather than a battery. The advantage of hydrogen fuel cell technology, say its supporters, is that it continually generates electricity while the car is running. Also, because it is the most plentiful element in the universe, hydrogen provides a cheap and renewable resource that doesn’t produce any carbon dioxide pollution. While the differences between electric vehicles and hydrogen fuel cell vehicles may seem relatively minute, they have been enough to cause occasional testiness between Toyota and Tesla founder Elon Musk. With increased competition in the electric vehicle market, Toyota’s standing as producers of the Mirai, the world’s first mass-produced hydrogen fuel cell electric vehicle, gives the giant automaker an advantage over its smaller yet nimbler competitor. Viewed in this light, Toyota’s presence at an Aspen Ideas Festival panel touting the future of mobility dude to hydrogen fuel cell technology is as significant as the Mirai driving range record. In Lentz’s view, the Mirai is poised to do nothing less than “usher in a new era of efficient, hydrogen transportation,” and its clear that the company is confident in this stance given its willingness to make its 5680 fuel-cell patents freely available to all interested parties. Among the major automakers, Toyota has been the most committed to electric vehicle technology, most notably with its commercially and critically successful Prius line. As a relatively new entrant into the electric vehicle, Tesla has been no less driven to provide electric vehicles to consumers. However, both companies have taken different paths—Toyota with hydrogen fuel cell vehicles, Tesla with electric vehicles—that may well determine the future of the “green car” market. Of course, whether Toyota is successful in its path is for customers to determine, and that time appears to be shortly at hand. Toyota recently announced that the Mirai would be sold in eight Northern California dealerships this October, which should give electric car lovers in that region ample opportunity to test drive their Mirai cars from San Francisco to San Jose by late 2015.