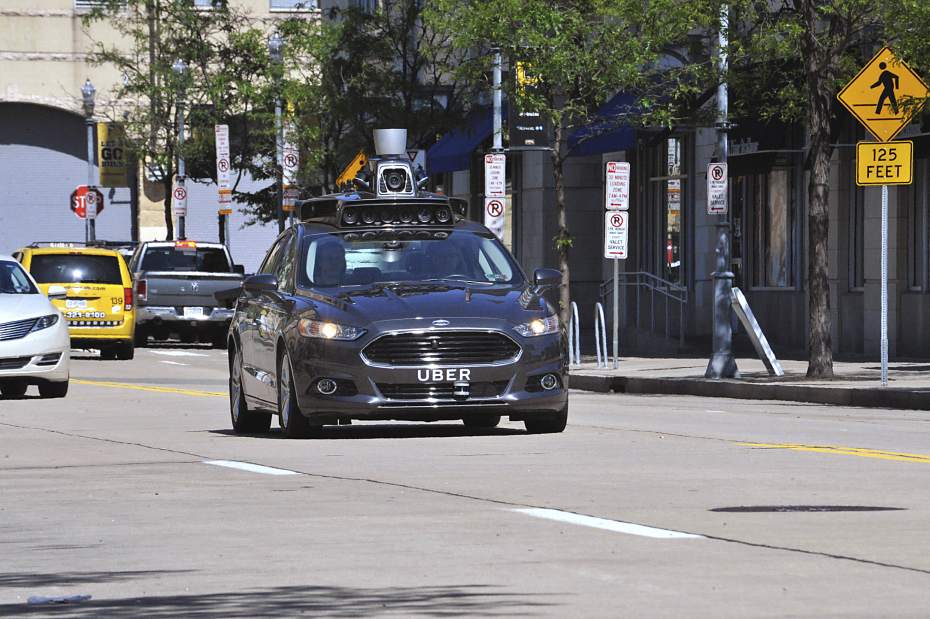 Uber has officially made its presence known in the race for an autonomous auto. After; what seems like; every automotive entity has made gains in the area of autonomy, Uber has joined the exclusive ranks of public testing. Those that reside or visit Pittsburgh have a chance to see Uber’s fleet of Ford Fusions driving about the city. Unlike other more inconspicuous autonomous autos testing on public roads, there is no chance anyone will pass this car without noticing, not that any existent autonomous models are known for blending in. Granted, most autonomous vehicles are prominent among the normals, but Uber’s test car (much like the company itself) is uniquely distinct among its competitors. For example, it is theoretically feasible to pass one of Google‘s plethora autonomous Prii (the plural of Prius) and assume it is just a hybrid with a weird roof rack (namely this test Prius). However, it would not be possible to pass the Uber edited Ford Fusion without thinking ‘what is that thing’ at the very least. If one does not notice the litany of Uber badges on the granite grey Ford Fusion, one could incorrectly conclude it has a number of different uses, other than autonomous pioneer of the east. The autonomous Fusion has what appears to be a funky futuristic dashboard upside down and on the roof. Ignoring the badging, one could assume Uber’s Ford Fusion is a portable party transporter. The line of round sensors on the roof, look like a line of speakers with what could be laser lights and spinning siren for a light show above it. If not that, it could be construed as being a military grade vehicle. Like a Ford Fusion police car that shoots things from its roof. Jokes aside, Uber’s Ford Fusion does seem to have the autonomous technology more seamlessly integrated into the automobile in which it occupies, than its competitors. In all of the other examples, the technology appears to be secondary; Despite what appears to be the most advanced autonomous Uber itself admits to being in a relatively incipient position chronologically speaking. In that vein, it is unclear whether or not the fleet of Fusions will be used for shuttling Uber passengers. However, it is unlikely that they will, due to the nascency of the technology. Conversely, that is what the conjunction of GM Lyft will be doing as soon as next year. In that sense it is easy to misinterpret the facts. If one were only to see the state of the automobile housing the technology, the assumption would be the Uber Ford Fusion looks the most advanced therefore the technology is. However, that is faulty logic, in reality Uber is the farthest behind relative to the other autonomous entities. Google is light years ahead of most others, but Baidu, LeEco, Audi, Ford, GM and Lyft are all ostensibly better allocated for the autonomous evolution. Furthermore, even ignoring the autonomy of it all, it seems the Uber powerful position is vulnerable to being taken by their competitor in terms of ride sharing. After joining forces with GM, Lyft has placed itself in a promising place in which to capitalize on the burgeoning autonomous industry.