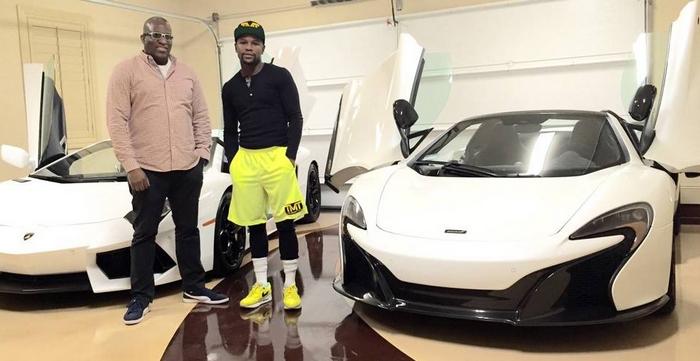 Floyd Mayweather’s nickname is Money, which is apt when you consider his tastes in luxury vehicles. His fancy car fetish is so extreme that one Las Vegas dealership, Towbin Motorcars, has sold over 100 cars to Mayweather—which he paid for with cold hard cash.

Among the vehicles Mayweather purchased from Towbin Motorcars include 16 Rolls-Royces and three Bugattis. It’s no wonder that they literally open their doors all hours of the day for the boxer, who has been known to make late-night shopping trips at dealerships across the country.

Outrageous stories of Mayweather’s car love abound. An exotic-car dealer in Los Angeles with the nickname of Dr. Bugatti was tasked by Mayweather to deliver a Bugatti Veyron to his Las Vegas mansion in 12 hours. Dr. Bugatti was able deliver in 11.

Dr. Bugatti, whose real name is Obi Okeke, estimates that he’s sold 39 vehicles to Mayweather at a combined total of $6.2 million.

“I try to give him service that nobody else will provide,” he added.

Certainly Mayweather, who stands to earn as much as $180 million in his highly anticipated matchup with Manny Pacquiao this weekend, can afford such luxuries. Currently, his estimated worth is $420 million, which seems like enough money for Money to spend on many more high-end vehicles.

While you may not be able to do it up like Mayweather, you can still find a great new luxury vehicle in your area with Auto Publishers. Our area dealer listings pages include 2014-2015 Porsche and Mercedes-Benz models, among others. Great pre-owned vehicle listings are also available when you visit Auto Publishers, the decisive leader in the industry!