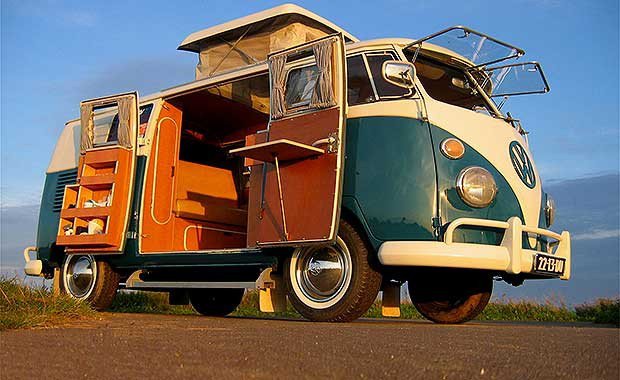 It’s been a rough couple of months for Volkswagen, but that doesn’t mean every story about the scandal-scarred automaker is negative. In fact, this bit of news might inspire a wistful smile and feelings of nostalgia from baby boomers reliving their hippie days. Volkswagen is rebooting its classic camper van model that it discontinued back in 2013. A VW board member confirmed during the recent New York Auto Show that the beloved “hippie van” would make its triumphant return as an electric vehicle concept. Volkswagen introduced the original Volkswagen camper van in 1950, making it a predecessor to today’s cargo vans and passenger vans. The vehicle was known colloquially as the “hippie van” during the counterculture era of the 1960s. However, by 2013 Brazil was the only country that still made the VW camper van, and production of the vehicle ceased due to safety regulations that were recently passed in that country. This September, Volkswagen development chief Hans-Jakob Neusser discussed the automaker’s plans for the updated VW camper van. He made it clear in his interview with Autocar that VW would adhere to three “very important” design features with its latest camper van model. “First the wide, solid, D-Pillar, second the boxy design of the centre section and, thirdly, the front end must have a very short overhang. The distance from the A-pillar to the front end must be very short,” Neusser said. Neusser also told Autocar that Volkswagen was reviving another lost classic, the Microbus camper. An updated concept version of the vehicle will appear at the Consumer Electronics Show in Las Vegas next January. Volkswagen made two previous attempts to revive the Microbus—specifically, in 2001 and 2011—but neither concept was actually produced. The rebooted Microbus, which is scheduled for a 2017 production date, is said to feature an electric drivetrain, WiFi connectivity, and a lithium-ion battery like the ones used in the Audi RB E-Tron and Audi E-Tron Quattro concept models. For those with (understandable) qualms about VW’s environmental standards, Suzuki is rolling out an electric van model that is said to be a spiritual successor to the VW Microbus. Suzuki’s Air Triser van concept was unveiled earlier this month at the Tokyo Motor Show, where it wowed onlookers with its mix of retro styling and modern amenities. In the wake of the company’s emissions embarrassment, Volkswagen is deeply invested in convincing the public that it can be an environmentally responsible car company. And to be fair, the electric camper van and Microbus concepts seem like fun ways to regain consumer support. However, with the company’s plans to de-emphasize volume growth in order to maximize profits, some of VW’s concepts may end up on the cutting room floor, which may end up bumming people out about VW all over again. Stay tuned to Auto Publishers for more on this developing story. Image Source: GearHeads