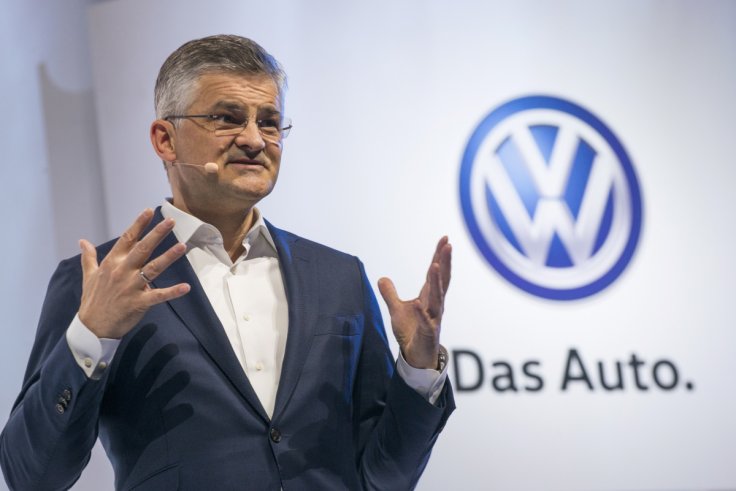 UPDATE: In his oral testimony to the U.S House Oversight and Investigations subcommittee, Volkswagen America CEO Michael Horn apologized for his company’s actions while pinning the blame on unnamed “individuals” for cheating emissions tests and deceiving U.S. regulators. "This was a couple of software engineers who put this in for whatever reason," Horn said on Thursday with regard to the defeat device software that enabled the company to thwart emissions tests. As the first Volkswagen executive to testify under oath, Horn faced the brunt of questioning from members of Congress. In one contentious exchange, Rep. Joe Barton of Texas expressed skepticism with Horn’s claim that executives had no knowledge of the surreptitious software fixes. Horn conceded “it is very hard to believe” that executives weren’t aware of the problem but later reiterated his claim that he and members of the board weren’t aware of the defeat devices until “a few days before” the company met with U.S. regulators in early September. Of particular interest to U.S. Volkswagen diesel vehicle owners are the measures Horn proposed to fix them. According to Horn, most of the 482,000 Volkswagen diesel models sold stateside will require both software and hardware fixes in order to be brought into compliance. Most of these models include a first-generation 2.0-liter diesel while the remaining models use a second-generation engine, a Volkswagen spokesperson said later. Current VW vehicles sport a third-generation engine that meet emissions standards and therefore only require a software change. Despite the challenge of recalling and repairing nearly a half-million vehicles, Horn believes that Volkswagen is up to the challenge. "We know we can fix these vehicles to meet emissions standards," Horn said. What we offered in this update were the highlights (such as they were) of Horn’s testimony. For the full blow-by-blow, you can view the video below:

“We totally screwed up.” These were the words delivered by Michael Horn (pictured), President and CEO of Volkswagen Group of America, at a launch party for the Passat in New York late last month. Horn admitted that Volkswagen had deceived the EPA and the California Air Resources board by installing software in its diesel vehicles that cheated U.S. emissions tests. In light of recent revelations, however, Horn and others at the company may have engaged in a cover-up about the cover-up. And that’s where we begin things in today’s news roundup about the world’s most scandalous automaker. Mr. Horn Goes to Washington In written testimony released prior to his appearance at a congressional hearing on Thursday, Horn admitted that he was aware of emissions violations for over a year before revealing the problem to U.S. regulators. “In the spring of 2014 when the West Virginia University study was published I was told that there was a possible emissions non-compliance that could be remedied,” Horn wrote in his statement to the U.S. House Committee on Energy and Commerce. Despite the non-compliance, Horn claims company engineers assured him that they would work with EPA regulators to resolve the issue. Volkswagen then spent the next 18 or so months strenuously denying any wrongdoing, going so far as to attempt to discredit and suppress the West Virginia research project that first detected the emissions irregularities. However, by early September 2015 Volkswagen finally admitted to regulators that it had installed defeat devices in order to conceal the high levels of nitrous oxide emitted by millions of the diesel vehicles the automaker sold worldwide. In light of these revelations, Horn will undoubtedly have to explain why he and his company wasn’t more proactive in addressing the emissions non-compliance in his oral testimony today to the House Subcommittee on Oversight and Investigations. Horn is also expected to account for the origins of the emissions cheating, who was responsible for said cheating, why they did it, and what steps the company will take to resolve the problem that will satisfy regulators and the car buying public alike. Stay tuned. Meanwhile in Germany… Prosecutors conducted their search for “secure documents and data storage devices” that, according to the AP, could shed light on the perpetrators of the Volkswagen emission scandal. The search focused on Volkswagen’s headquarters in Wolfsburg, along with other unnamed offices throughout Europe. The investigation by German prosecutors is being carried out with the full consent and cooperation of Volkswagen. In a statement, the company said it would “support prosecutors as best we can in investigating the matter and the people responsible” to determine the source of the emissions cheating. This wasn’t the first time—nor will it be the last—that German prosecutors have looked into the emissions shenanigans at Volkswagen. Last week we reported that prosecutors in the German city of Braunshweig were launching its own investigation into fraud charges levied by German citizens against former Volkswagen CEO Martin Winterkorn. And speaking of Winterkorn, he and a few of his former lieutenants have been sanctioned by Volkswagen for their possible roles in emission test cheating. Reuters reports that the company has suspended several members of its senior management and has even hired an outside U.S. law firm to conduct an internal investigation. Among the suspended employees are Ulrich Hackenberg and Wolfgang Hatz, two engineers who both played key roles in the development of Volkswagen’s line of diesel vehicles during the Winterkorn era. Another key figure, Heinz-Jakob Neusser, who was head of development at Volkswagen, is also said to be a focus of the investigation. Regardless of these measures, many wonder whether any real change to Volkswagen’s M.O. is possible, particularly with entrenched old guard figures like current CEO Matthias Mueller, who ran Porsche during the Winterkorn era, still in positions of power with the company. As one insider put it, Volkswagen has “a strong tradition [of handling] such matters in-house,” which is borne out by the company’s resistance toward seeking outside restructuring assistance. While Volkswagen execs have talked a good game about taking responsibility for its emissions cheating, there is an obvious intransigence about coming completely clean about their dishonest and dangerous deceit. As reported by the New York Times, Mueller said the following to a German newspaper regarding the role Winterkorn, his predecessor, played in the emissions cover-up: “Do you really think that a chief executive had time for the inner functioning of engine software?” Maybe not, Mr. Mueller—but he and other former and current execs at Volkswagen had better start producing some answers as to how this could’ve happened. And fast. Image Credit: International Business Times