Volkswagen May Have to Cut Jobs to Cover Lawsuit Costs 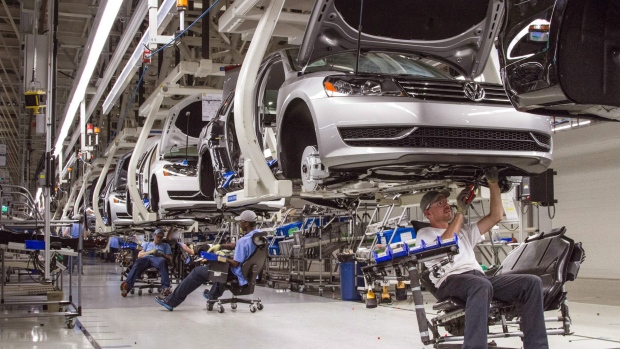 While the emissions-cheating scandal at Volkswagen has cost the jobs of high-level VW execs like former CEO Martin Winterkorn, it hadn’t disseminated to members of the rank and file like workers at VW assembly plants in the U.S. (pictured). But that may soon change, according to a report today from Reuters. According to the noted news agency, Volkswagen may be forced to cut jobs in both the U.S. and Europe in order to defray the costs of settling the automaker’s various lawsuits. In particular, the German insurance company Allianz Global Investors is set to sue VW as a result of sharp reductions to the automaker’s stock prices, which in turn has cost Allianz an estimated $9.5 million in U.S. currency. Since news of the scandal broke in September, VW stock has been reduced by 31 percent. A source close to the situation told Reuters that the outcome of the Allianz suit could have “substantial and painful” repercussions for Volkswagen were it forced to pay a sizable settlement. Allianz would be joining a growing litany of public companies and private individuals who have filed lawsuits against the Wolfsburg-based automaker. Volkswagen will likely face stiff criticism after representatives for the company admitted under oath in a German court that it delayed an announcement of its diesel emissions scandal in hopes of first striking a deal with U.S. regulators. Lawyers for Volkswagen claim that the delay was necessary so as to not scotch negotiations between the automaker and the U.S. government. Presumably the discussions didn’t lead to a negotiated solution in the short term, as the EPA issued its first notice of violation shortly thereafter in late September. Along with its legal woes back home in Germany, Volkswagen is contending with a series of lawsuits filed against the company in the U.S. Chief among them is a civil complaint filed by the DOJ and EPA that could potentially set VW back as much as $48 million. The two U.S. government agencies are suing VW on behalf of customers who are seeking to recoup financial damages after it was revealed that over a half-million diesel vehicles sold in the U.S. were outfitted with illegal defeat devices used to skirt emissions regulations. The existential threat posed by the lawsuits filed against Volkswagen in the U.S. and elsewhere has even inspired two age-old foes—labor and management—to form an allegiance of sorts. VW labor chairman Bernd Osterloh expressed concern that the lawsuits may not only affect how Volkswagen does business, but may also trickle down to the people employed by the company. In fact, Osterloh recently cautioned his workers to expect “dramatic social consequences,” which presumably includes salary reductions and layoffs. Unfortunately, even if Volkswagen were to slash its workforce, the long-term financial outlook for the company may remain grim for the foreseeable future. Allianz is expected to launch its lawsuit against Volkswagen sometime this month, though the investment company is said to be weighing its options. Stay tuned to Auto Publishers for more on the developing scandal at Volkswagen.