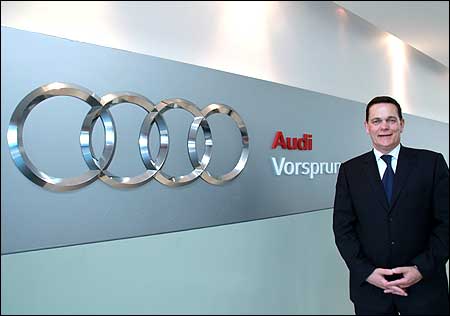 Since Volkswagen’s shady attempts to trick environmental regulators were first revealed to the public, the automaker (surprisingly) hasn’t yet had to face serious legal repercussions for its actions. But that may soon be changing. This week, two different governments—one foreign, the other domestic—brought suit against Volkswagen. The first of these governments is South Korea, whose Ministry of Environment filed criminal complaints against Johannes Thammer (pictured), Managing Director of Audi Volkswagen Korea. In a statement, the ministry expressed its dissatisfaction with the recall plans of VW’s Korea division, characterizing them as “insufficient and [lacking] key information.” Back in late November, The Wall Street Journal reported that the South Korean government ordered a recall of over 125,000 diesel-engine Volkswagen vehicles and fined the company the equivalent of $12.3 million. This was the culmination of a two-month investigation into Volkswagen that revealed the company had installed defeat device software in over 15 VW and Audi vehicle types. In addition, New Mexico now joins Texas and West Virginia as U.S states to launch official legal action against Volkswagen. New Mexico State Attorney General Hector Balderas filed a suit against VW and its U.S.-based subsidiaries for “profiteer[ing] and breach[ing] the trust of New Mexico consumers.” The state AG claims that between 4,000 to 10,000 Volkswagen vehicles sold in the state were outfitted with defeat device technology. On the federal level, former FBI director Robert Mueller was appointed “settlement master” over the multitude of Volkswagen-directed lawsuits. To combat the veritable tidal wave of criminal complaints, Volkswagen reportedly hired Louis Freeh, himself an ex-FBI director, who now runs a risk management firm. News of these appointments comes on the heels of the civil complaint filed by the DOJ and EPA against VW and five subsidiaries that cited about 600,000 diesel-powered vehicles as recallable. While we here at Auto Publishers caution against a rush to judgment in this matter, the preponderance of investigations and lawsuits against Volkswagen is certainly worrisome. With that in mind, we present you with the Judas Priest tune that inspired this article’s headline: